SEOUL, April 9 (Yonhap) -- The recovery of the South Korean sunken ferry has been an unprecedented challenge that gave the veteran salvage team many "first" experiences, the chief diver involved in the project said Sunday.

"I have dived about 6,000 times, spent some 30,000 hours of my life in water, but the Sewol operation has been somewhat different," Jin Feng, the head of diving unit of the Shanghai Salvage, told Yonhap News Agency in an interview on Sunday.

The Chinese salvaging firm has worked with the South Korean government since August 2015 to recover the 6,800-ton ship from the seabed. The ferry capsized in waters off the southwestern tip of Jindo Island on April 16, 2014, killing 304 people on board with nine of them still unaccounted for.

The sinking of the Sewol ferry has been the worst maritime disaster in the country's history. Most of the victims were high school students en route to the resort island of Jeju on a school trip. Alleged inaction and unclear whereabouts of former President Park Geun-hye at the time of the sinking were some of the key issues that triggered moves for her impeachment.

The 51-year-old veteran has led a team of some 100 professional divers in the herculean operation. The Shanghai Salvage used two large barges to lift the wreck from the bottom of the sea.

"The seawater here is extremely cold and the water's very muddy, which has made our job much harder," he said, as he recalled the first time he went into the water. "The ship had already been under water for so long that much of it was already being corroded and full of marine animals."

The coast near Jindo Island is notorious for its fast and unpredictable current. Jin said his team had to get ready at least two hours before the low tide came, which only lasted for a short while throughout the operation.

"We wore diving suits that had been inserted with hot water to extend the time in water as long as possible."

On Sunday, the government said the vessel, which now weighs some 17,000 tons due to water and mud inside, has been moved on land, three weeks after it was raised from the seabed.

The Sewol operation has been not only an extremely risky job but gave many first experiences even for the veteran divers, Jin said.

"We've never had a ship that was lifted intact, lying tilted on the ground because usually we place a wreck upright before raising it. It was also the first time for us to cover every window and door of the ship with nets to prevent any losses."

Despite the hardship, Jin expressed confidence in his work and team, saying that he would not hesitate to take part again if he went back two years and was asked to do the job. 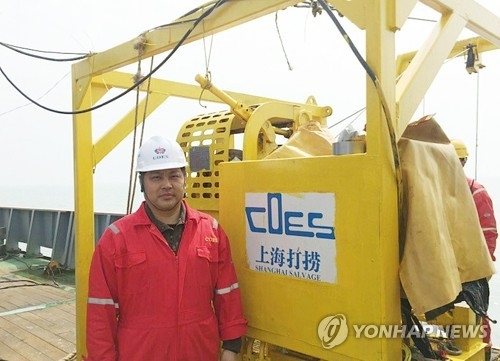