The former software mogul would also win a two-man match against Moon with a wide margin, if the election is held now, according to the survey conducted by the Korea Research Center on Saturday and Sunday.

The poll, jointly commissioned by Yonhap News Agency and public broadcaster KBS, supported views that the election is shaping up to be a two-way race between old liberal rivals. 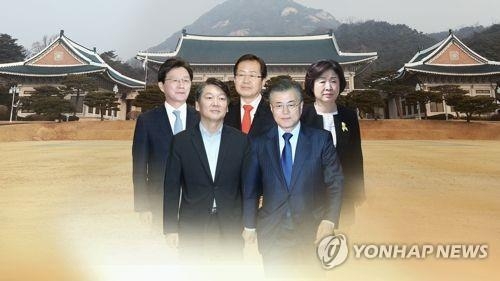 In the five-way competition, Ahn garnered 36.8 percent against Moon's 32.7 percent.

Nearly a fifth of respondents, or 19.8 percent, said they did not support any of the candidates, were unsure, or gave no response.

Until recently, Moon of the liberal Democratic Party was the clear frontrunner in nearly all polls in the run-up to the May 9 presidential election. Earlier last week, however, a number of surveys began to show Ahn overtaking him in a hypothetical matchup.

In the latest poll, Ahn beat Moon in a hypothetical two-way race with 49.4 percent against 36.2 percent.

He also won various scenarios for a four-way race. Under a merger of candidacies where Hong becomes the conservative standard-bearer, Ahn emerged with 37.1 percent of the vote against Moon's 32.8 percent. With Yoo the flag-bearer, Ahn garnered 39.1 percent against Moon's 32.3 percent. In the event that Yoo yields to Ahn, the latter won 40.4 percent while Moon won 33.6 percent.

By age group, Moon beat Ahn among voters aged 19-49 but lost to his rival among voters aged 50 and above. By region, Moon led in the southeastern cities of Busan and Ulsan, the surrounding South Gyeongsang, the southern island of Jeju as well as the northeastern province of Gangwon.

Ahn, however, received more support in Seoul, the nearby city of Incheon, the surrounding province of Gyeonggi, the central region covering Daejeon, Sejong and the Chungcheong provinces, the southwestern region of Gwangju and Jeolla, as well as the southeastern region of Daegu and North Gyeongsang Province.

The survey was conducted on 2,011 voters and had a margin of error of 2.2 percentage points at the 95 percent confidence level.