SEOUL, April 10 (Yonhap) -- The presidential nominee of the conservative Liberty Korea Party resigned as governor of South Gyeongsang Province on Sunday with just enough time to prevent a by-election to pick his successor.

Hong Joon-pyo, who won the nomination of the former ruling party on March 31, put off his resignation until virtually the last minute despite criticism he was abusing a loophole in the law. 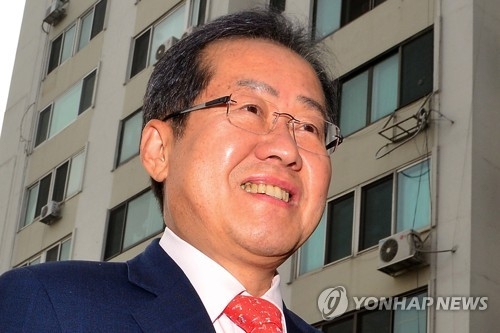 The law requires a public servant running for the top elected office to resign at least 30 days before a presidential election. It also stipulates that a local election watchdog must be notified of an upcoming gubernatorial vacancy at least 30 days in advance in order for the relevant by-election to be held on the same day as the presidential poll.

Hong deliberately informed the provincial council of his resignation late Sunday, forcing officials to notify the election watchdog on Monday.

Hong's decision leaves the province without a governor until the regular gubernatorial election in June 2018. The candidate has said his early departure would trigger a series of resignations by lower level officials seeking to run for governor and create a dent in the province's coffers through a costly by-election after he worked hard to build its fiscal soundness.

Hong is seen as the potential standard-bearer of the conservative camp in the May 9 presidential election.