WASHINGTON, April 9 (Yonhap) -- U.S. National Security Advisor H.R. McMaster said Sunday that President Donald Trump has ordered him to prepare "a full range of options" to the nuclear and missile threats North Korea poses to the U.S. and its allies.

McMaster also said on "Fox News Sunday" that it was a "prudent" decision to send the San Diego-based USS Carl Vinson strike group toward the Korean Peninsula, a move designed to warn Pyongyang against additional provocations.

"North Korea has been engaged in a pattern of provocative behavior. This is a rogue regime that is now a nuclear capable regime, and (Chinese) President Xi (Jinping) and President Trump agreed that that is unacceptable, that what must happen is the denuclearization of the Korean Peninsula," McMaster said.

"And so, the president has asked us to be prepared to give him a full range of options to remove that threat to the American people and to our allies and partners in the region," he said. 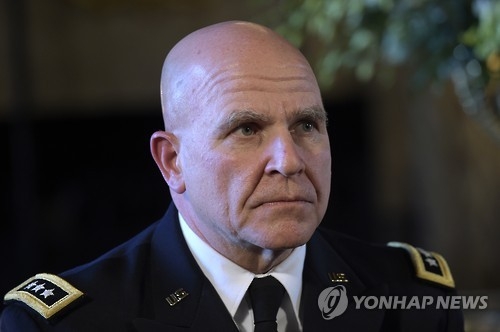 During their first summit talks Friday, Trump and Xi noted the urgency of the threat of the North's weapons program and agreed to increase cooperation to convince the North to abandon its illicit weapons programs, according to the White House.

Secretary of State Rex Tillerson also said that the two sides are committed to working together to resolve the standoff in a peaceful manner, but "in order for that to happen, North Korea's posture has to change before there's any basis for dialogue or discussions."

The top American diplomat also said that the U.S. is prepared to chart "our own course if this is something China is just unable to coordinate with us," echoing Trump's repeated warning that the U.S. will take on the North on its own unless China helps rein in the North.