The remark contrasts with Tillerson's previous assertion that two decades of diplomatic efforts to disarm the North have failed, and there is no point in pursuing the diplomatic path any longer, and the U.S. should consider all options, including the use of military force.

The sharp change in tone came after U.S. President Donald Trump held his first summit talks with Chinese President Xi Jinping. Beijing has long called for the U.S. to resume negotiations with Pyongyang to defuse tensions.

"What we would hope is that with no further testing, obviously their program doesn't progress," Tillerson said on ABC TV's "This Week." "What we have asked for is for them to cease all this testing before we can begin to think about having further talks with them."

Tillerson also said the U.S. goal is the North's denuclearization, not regime change.

"We have been very clear that our objective is a denuclearized Korean Peninsula. We have no objective to change the regime in North Korea; that is not our objective. And so the whole reasons underlying the development of a nuclear program in North Korea are simply not credible," he said.

"They're working their way towards the test of an intercontinental ballistic missile. And these are the kinds of progress that give us the greatest concerns. So we have been quite clear with the regime in Pyongyang that that's what we want them to cease," he said.

Tillerson also mentioned the possibility of dialogue with the North on Friday while briefing reporters on the outcome of the talks between Trump and Xi, saying the two countries are committed to working together to "see if this cannot be resolved in a peaceful way."

"In order for that to happen, North Korea's posture has to change before there's any basis for dialogue or discussions," Tillerson said.

Even a mention of the possibility of dialogue with the North is seen as a big change for Tillerson as he has repeatedly displayed deeply negative views of talks with Pyongyang. After the North conducted the latest missile launch last week, he said, "The United States has spoken enough about North Korea." 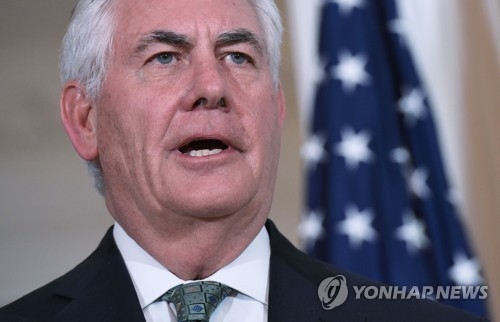 On Sunday, Tillerson said Trump and Xi had "very extensive discussions" about the North and "a full range of options" were discussed between the two leaders as they met one on one for "quite some time" to discuss the issue.

The talks were also "very open" and "very candid," he said.

"President Xi expressed agreement that the situation has reached a new level of seriousness and threat. He expressed a view that he wanted to be supportive in terms of causing the regime in Pyongyang to change its view around the future need for those weapons," Tillerson said.

"China has expressed on multiple occasions, and they reaffirmed it in our discussions with us here in Mar-a-Lago, that their policy is unchanged and that is for a denuclearized Korean Peninsula," he said, referring to Trump's resort in Florida where the summit talks took place.

"We expect that they will. They have indicated that they will. And I think we need to allow them time to take actions, and we will continue to be in very close discussions with them," he said.

In response to a question if the U.S. is drawing up a plan to assassinate North Korean leader Kim Jong-un, Tillerson said he is aware of "no such plans."