SEOUL, April 10 (Yonhap) -- The South Korean women's national football team will try to clinch a spot at the top Asian competition on Tuesday as they take on Uzbekistan in North Korea.

South Korea and Uzbekistan will clash at Kim Il-sung Stadium in Pyongyang for their final match at the Asian Football Confederation (AFC) Women's Asian Cup Group B qualifying tournament, which also features North Korea, Hong Kong and India. South Korea are looking for their 12th consecutive appearance at the continental football tournament.

Only the top finisher in the group will advance to the 2018 Asian Cup in Jordan. The Asian competition also doubles as the qualifying tournament for the 2019 FIFA Women's World Cup in France, meaning any team except the winner in Pyongyang is automatically out for the women's showpiece event as well.

North Korea are currently the leaders in the group and they have finished the qualifying campaign with 10 points on three wins and one draw. The North Koreans have a plus-17 goal difference, after scoring 18 goals and conceding one.

South Korea, led by Yoon Duk-yeo, currently have two wins and one draw. In order to finish ahead of their neighbors, they must beat Uzbekistan by two goals to get the edge on goal difference, the first tiebreaker when two teams are tied in points.

Yoon's side have a plus-16 goal difference. They opened the qualifying campaign with a 10-0 win over India on Wednesday, followed by a 1-1 draw with North Korea on Friday and a 6-0 win over Hong Kong on Sunday.

A one-goal victory with at least two goals scored against Uzbekistan will also put South Korea in the top spot as they will have the edge on goals scored, the second tiebreaker after goal difference. 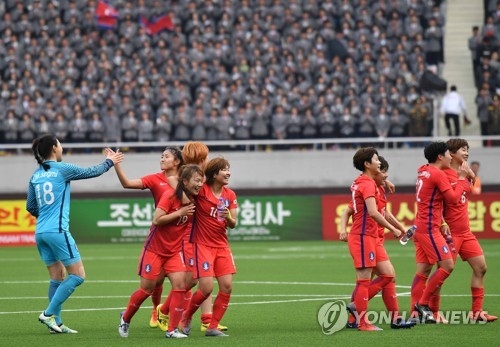 South Korea appear to have a good chance of defeating Uzbekistan by at least two goals. The Taeguk Ladies are ranked 17th in the latest FIFA rankings, 25 spots above Uzbekistan.

The Uzbeks are already eliminated from contention. They edged Hong Kong 2-1 and routed India 7-1, but were blanked by North Korea 4-0 on Sunday.

South Korea's first and only meeting with Uzbekistan was at the 1995 Asian Cup, where they trounced the central Asian side 6-0.

South Korea will need to be aware of Lyudmila Karachik, who has scored three goals so far in this competition. Makhliyo Sarikova is also one of the players to watch as the striker also has two goals.

South Korea's Lee Geum-min will try win the scoring title in the Group B qualifying tournament. She is currently tied with North Korea's Sung Hyang-sim and Kim Yun-mi at four goals.

Lee will join veterans such as Ji So-yun, South Korea's all-time leading scorer with 43 goals in 94 matches, and captain Cho So-hyun, who will have her 100th international match in Pyongyang.