Westerly winds carry smog from China, as well as yellow dust from Mongolia, to the Korean Peninsula particularly during winter and spring months, contributing to deteriorating air conditions here.

China's rapid industrialization for the past few decades has greatly aggravated air pollution in the world's most populous country with levels of particulate matter levels there rising to nearly 40 times the limits set by the World Health Organization during the winter.

Growing concerns over air pollution have propelled South Korea's air purifier market to surge to 1 trillion won ($888.4 million) in 2016 from 300 billion won in 2013.

"The stock are in short supply as the demand is growing," a Lotte HiMart official said. "It takes about one week for our customers to get air purifiers after placing an order." 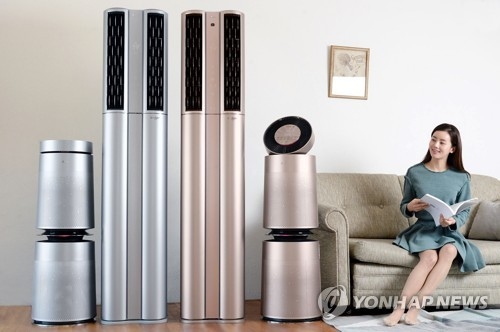 Local manufacturers said they are operating their production facilities at high capacity even during weekends, as well as weekdays, to catch up with the growing orders.

Samsung Electronics Co. said it has been operating its factory in Gwangju during weekends since early February to produce its latest high-end Blue Sky, which is priced at about 1 million won.

LG Electronics is doing the same at its factory in Changwon, South Gyeongsang Province, as the demand almost doubled in recent months compared with the same period last year.

Winix Corp. said it is considering expanding its production lines for air purifiers.