SEOUL, April 10 (Yonhap) -- Ahn Cheol-soo, the presidential nominee of the centrist People's Party, doubled his approval rating from a week earlier to narrow his gap with front-runner Moon Jae-in to just over 5 percentage points, a poll showed Monday.

The survey result backs recent indications that the May 9 election is sharpening into a two-way race between the two champions of liberal reform. 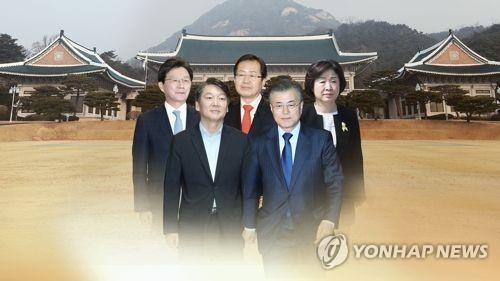 According to Realmeter, Ahn garnered 37.2 percent from Friday to Saturday, up 18.5 percentage points from the previous week, as Moon of the liberal Democratic Party consolidated his lead with 42.6 percent, up 7.7 percentage points.

Hong Joon-pyo of the conservative Liberty Korea Party came in a distant third at 8.4 percent, followed by Rep. Sim Sang-jung of the minor progressive Justice Party at 3.3 percent and Rep. Yoo Seong-min of the splinter conservative Bareun Party at 2.4 percent. Kim Chong-in, a former interim leader of the Democratic Party, debuted with 0.8 percent after declaring his bid as an independent last week.

In a hypothetical matchup, Moon received 47.6 percent against Ahn's 43.3 percent.

By region, Moon beat Ahn by a wide margin in Seoul, the nearby city of Incheon, the surrounding Gyeonggi Province, and the southeastern region of Busan, Ulsan and South Gyeongsang Province. Meanwhile, Ahn received far more in the northeastern Gangwon Province and the southern island of Jeju.

The two candidates were neck and neck in the central swing region of Daejeon, Sejong and Chungcheong, in southeastern Daegu and North Gyeongsang Province, and in southwestern Gwangju and the Jeolla provinces.

Voters in their 20s to 40s chose Moon over Ahn by an overwhelmingly large margin. Ahn received greater support among those in their 50s and older.

Moon won 66.2 percent against Ahn's 21.3 percent among voters who identified themselves as liberals. Among conservatives, Ahn beat Moon with 41.7 percent against 12.1 percent. Moderates chose Moon over Ahn by a narrow margin of 43.5 percent against 41.4 percent.

On the possibility of switching allegiance, 21.7 percent of Moon's supporters responded affirmatively, while 76.1 percent said they would root for the former Democratic Party leader until the end. Ahn's supporters were more vulnerable at 28.6 percent and 69.9 percent, respectively.

The survey was conducted on 2,244 voters nationwide and had a margin of error of 2.1 percentage points at the 95 percent confidence level.

In a separate poll released Sunday by the Korea Research Center and commissioned by Yonhap News Agency and public broadcaster KBS, Ahn beat Moon for the first time in a hypothetical five-way competition after garnering 36.8 percent against Moon's 32.7 percent.