SEOUL, April 10 (Yonhap) -- A 56-year-old man has been indicted on charges of attacking two journalists during a violent street rally against the Constitutional Court's decision to dismiss Park Geun-hye as president last month, prosecutors said Monday.

The defendant, identified only by his last name Lee, is accused of striking the reporters from Yonhap News Agency and KBS with a ladder on March 10, according to the Seoul Central District Prosecutors' Office.

The victims were on duty, just after the court upheld the impeachment of Park over a massive corruption scandal that eventually led to her arrest late last month.

Prosecutors said Lee was also charged with obstruction of duty and damaging the camera of the KBS reporter. 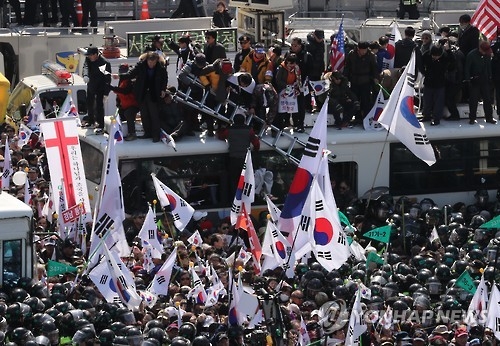 Man indicted for attacking reporters during protest against Park's ouster

Man indicted for attacking reporters during protest against Park's ouster