According to the data compiled by the Ministry of Culture, Sports and Tourism, South Koreans spent some 25.4 trillion won in visiting attractions at home in 2015 and 17.3 trillion won on overseas trips. The government has been prodding people to take more trips over the past few years in a bid to help boost sagging domestic spending.

They additionally spent 20.7 trillion won in buying goods and other items here for their overseas trips. The total also includes shopping worth some 7 trillion won at department stores and retail outlets, the ministry said.

The increase in size of the tourism industry is due in part to the large increase in the number of people going abroad during summer and winter peak times.

In 2015, the overseas consumption expenditures of South Koreans came to 26.27 trillion won according to the data from the Bank of Korea. 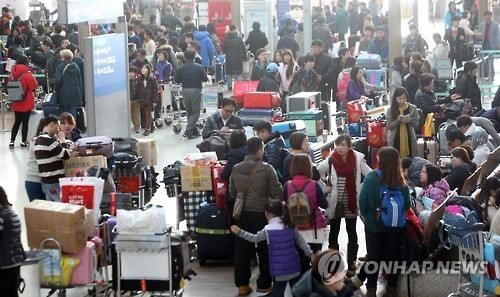