SEOUL, April 10 (Yonhap) -- Friday and Saturday's 8 p.m. to 9 p.m. time slot for tvN, arguably the biggest TV entertainment network in South Korea, has become one of the most coveted programming spaces in Korean TV today, having been occupied by hit shows such as "Reply 1988" and "Guardian."

Now tvN is placing its chips on "Chicago Typewriter," a new time slip series, following the commercial flop "Tomorrow with You." But whether the show is confident enough to recoup the massive viewership fallout caused by its predecessor remains to be seen.

"Chicago Typewriter" stars Yoo Ah-in as Han Se-joo, a hypersensitive and fussy star novelist who has writer's block. The story revolves around Han, his secret ghostwriter played by Koh Kyung-pyo, and a die-hard fan girl played by Lim, who later turns into Han's worst critic.

A mysterious antique typewriter acts as a conduit for the three to travel 70 years back in time, living as dissident writers during Japan's colonial rule of Korea. According showrunners, the series, which is in equal parts contemporary and periodic, starts off comedic in the modern day but later explores complex and serious themes related to Korea's independence movement.

To keep things in perspective, the show's initial scorecard is lower than that of "Guardian," which debuted with a 6.3 percent viewership. At the same time its noticeably higher than the 1.8 percentage rating for the finale of "Tomorrow With You."

Nevertheless, initial ratings have been weaker than expected for tvN trying to recreate the success of "Guardian," which rewrote cable TV ratings history early this year.

The tvN network is also relying heavily on Yoo's star power and the fact that the show is bringing Lim back to television after 13 years. Koh, a young and up-and-coming TV star, has also proved himself through his work in "Reply 1988."

In the first two episodes, the show introduced viewers to the star writer Han getting ahold of a mysterious typewriter, produced during the 1930s in the country's capital, then called Gyeongseong, through his ardent fan played by Lim. Han also gets embroiled in a plagiarism controversy.

But as of now, the ghostwriter character played by Koh hasn't revealed himself yet, while the development of the 1930s story line, in which Han is a struggling writer, also waits to be fleshed out further.

Recent time slip shows have been either hits or misses, with SBS TV's supposedly behemoth "Saimdang," in terms of viewership, still toiling in mediocrity. Whether "Chicago Typewriter" can deliver the promise of offering a differentiating aspect from similar genre works remains to be seen. 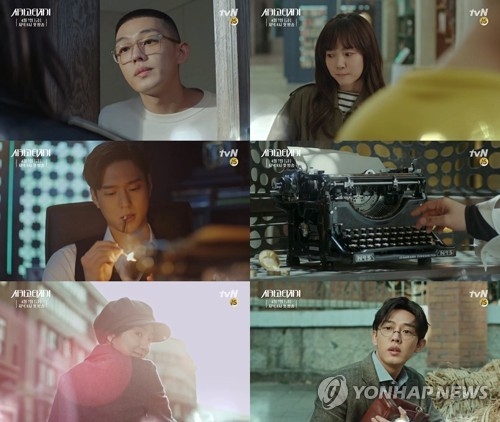