SEOUL, April 10 (Yonhap) -- A Seoul court will hold a hearing this week to decide whether to issue a warrant to arrest a former presidential secretary in connection with a corruption scandal that led to the removal of former President Park Geun-hye from office, officials said Monday.

The Seoul Central District Court will hold the hearing Tuesday at 10:30 a.m. to decide whether to arrest Woo Byung-woo, who served as senior presidential secretary for civil affairs from 2015 to 2016, they said.

The former aide of the ousted president is accused of aiding and abetting her longtime friend Choi Soon-sil in meddling in state affairs.

Prosecutors also suspect that Woo tried to disrupt a special presidential inspector's investigation into the scandal and interfered with personnel issues of government officials. 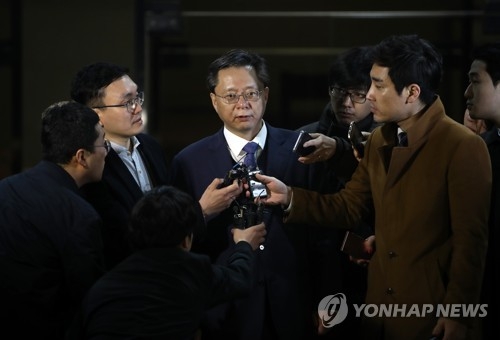 Court to hold hearing on arrest of ex-presidential aide Tuesday

Court to hold hearing on arrest of ex-presidential aide Tuesday