SEOUL, April 10 (Yonhap) -- The personal computer distribution ratio at South Korea's elementary and secondary schools has nearly doubled over the past decade, according to a report released Monday by the Ministry of Education.

The ministry's "2016 school informatization white paper" said that the number of students per PC stood at 3.6 for elementary schools, 3.4 for middle schools and 3.1 for high schools. A decade earlier in 2006, the corresponding figures were 6.8, 6.1 and 5.6 students for elementary, middle and high schools respectively.

As of October last year, the ratio of tablet computers to entire school PCs was tallied at 9.5 percent at middle schools, 7.8 percent at elementary schools and 3.4 percent at high schools, the report found. 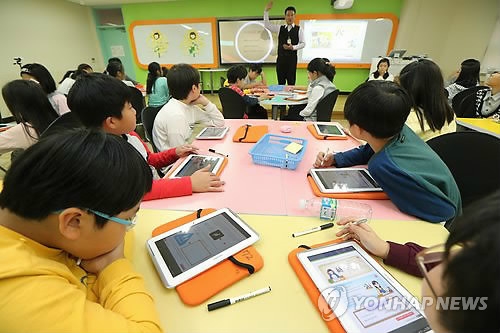 Taking advantage of the improved computer infrastructure at schools, the government plans to introduce digital textbooks based on virtual reality and augmented reality technologies and develop models for future schools, ministry officials said.

Amid the growing emphasis on future-oriented education in preparation for the fourth industrial revolution, school informatization infrastructure will also be utilized to speed up artificial intelligence-based eduction, they noted.

"The government has steadily expanded the informatization infrastructure at schools. Such efforts will continue to be made to introduce digital textbooks to local schools and strengthen artificial intelligence-related education," said a ministry official.

Digital textbooks, in which students download files to their computers or tablet PCs for classroom use, began to be adopted at some elementary and middle schools on a trial basis beginning in 2015.

PC distribution at schools doubles over past decade

PC distribution at schools doubles over past decade