SEOUL, April 10 (Yonhap) -- South Korea's bourse operator said Monday that it has toughened its penalties for tech-laden KOSDAQ firms that falsely disclose information, in a move to try to regain investor confidence.

A company listed on the secondary board is designated as an "unfaithful disclosure" firm when it intentionally delays a regulatory filing or reports false information twice a year.

The toughened penalties require an "unfaithful disclose" firm to pay a fine of up to 10 million won (US$8,769) per penalty point if it again violates the rules on regulatory documents, according to the Korea Exchange.

Previously, the fine was up to 5 million won per penalty point.

If a company submits a false regulatory filing twice a month or three times a year, it will get two penalty points. 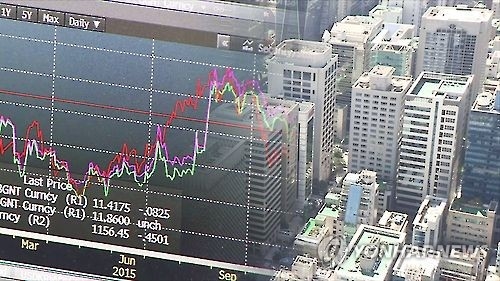 The drugmaker has been alleged to have deliberately delayed the sensitive disclosure that Boehringer Ingelheim, based in Germany, aborted an anti-cancer medicine contract worth more than US$700 million.

The case has rekindled a controversy over short-selling practices amid suspicions that some institutions exploited Hanmi's belated public notice.

The number of "unfaithful disclosure" cases on the KOSDAQ market rose to 72 last year from 53 in 2015.
(END)