SEOUL, April 10 (Yonhap) -- Moon Jae-in, the presidential candidate of the liberal Democratic Party, saw his approval rating dwindle over the past few weeks as all his contenders from both ends of the spectrum "naturally" focused their attacks on the front-runner, local observers said Monday.

Their accusations include what Moon and his campaigners call groundless allegations over the past employment of Moon's son, but political observers also blame Moon's failure to attract new, floating voters to his side for his apparent slump in election polls.

In a recent poll conducted by the Korea Research Center, Moon garnered a 32.7 percent approval rating, maintaining his comfortable lead over conservative rivals such as Hong Joon-pyo of the former ruling Liberty Korea Party who came in a distant third at 6.5 percent, but trailing his biggest rival Ahn Cheol-soo of the center-left People's Party at 36.8 percent. 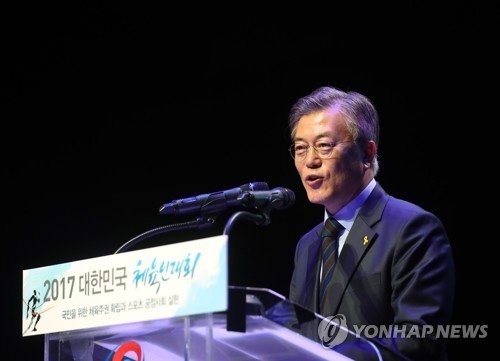 The outcome of the poll, released Sunday, apparently set off alarm bells at Moon's election camp as it marked the first time in months, if ever, when the longtime front-runner took the backseat in a race that can have only one true winner.

Moon's descent from the top position was partly attributed to long-lasting attacks from his opponents, who have frequently labeled him a "commie."

As late as last month, the elected head of Seoul's Gangnam-gu District Office, Shin Yeon-hee, came under police investigation on suspicions of spreading online articles accusing Moon of being a communist.

However, the observers note the accusation may have had little to do with the recent fall in Moon's approval rating as he is already considered to be on the far left.

Rather, the drop may have to do with persistent allegations over his son Joon-yong's former employment at the state-run Korea Employment Information Service, they said.

Joon-yong landed a full-time job at the employment service center in late 2006, when his father was working at the presidential office Cheong Wa Dae as a senior secretary for political affairs.

Moon also served as chief of staff for the late former President Roh Moo-hyun in 2007-2008, apparently grounds for his opponents' repeated and persistent allegations that his son may have enjoyed favorable treatment when he was given the job in 2006.

Such allegations were first raised in 2007, prompting an investigation by the Labor Ministry, which later concluded no special treatment had been extended to Moon's son.

Moon's opponents renewed their attacks as the case drew a comparison to allegations that Choi Soon-sil, a longtime friend of ousted former President Park Geun-hye, pulled strings to get her daughter into a prestigious women's college in Seoul, which, according to observers, sparked strong anger among local people who are more sensitive to injustice or inequality than anything else. 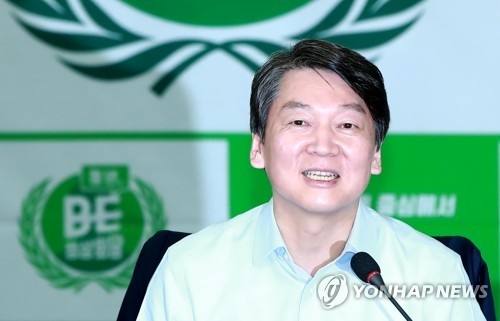 Moon apparently hoped to put an end to the allegation once and for all when he filed a formal complaint against Rep. Shim Jae-chul of the conservative Liberty Korea Party last week on suspicions of election law violations by spreading false rumors.

Still, the problem with Moon's dwindling popularity may also be coming from his apparent failure to attract new supporters, the observers noted.

The May 9 election is widely viewed to have tilted in favor of the liberal faction as it follows a massive corruption scandal that led to the ouster of the former conservative president, also causing the presidential election to be held more than seven months ahead of its original schedule.

With the presidential candidate of the former president's party well out of favor with the people, voters are seemingly willing to give their blessings to anyone who is not from the conservative party but appears remotely conservative.

Moon, often viewed as radical at best, stands little chance of winning the hearts of such floating voters, they said.

Ahn, on the other hand, is going all out to appeal to such voters, saying he will embrace and employ both the liberal and conservative factions if elected.

The software mogul-turned-politician has also hinted at the possibility of extending a special pardon to former President Park in an apparent attempt to win the support of Park's small but strong group of followers.

Moon, on the other hand, continues to call Park and her supporters an evil force that must be punished and destroyed.