Seoul are the defending champions of the top-flight K League Classic, but they are on the brink of elimination at the 2017 Asian Football Confederation (AFC) Champions League.

Seoul, led by head coach Hwang Sung-hong, have yet to collect a win after three matches in Group F, where they compete against Shanghai SIPG of China, Urawa Red Diamonds of Japan and Western Sydney Wanderers of Australia. The six-time K League winners are currently the only South Korean club at the AFC Champions League (ACL) without a win.

Hwang's side lost to Shanghai 1-0 at home and were crushed by Urawa 5-2 on the road in February. They were also defeated by Western Sydney 3-2 at home last month.

With only three matches remaining, Seoul are the bottom dwellers in the group. Shanghai are the leaders with nine points, followed by Urawa at six and Western Sydney at three.

Seoul, which reached the ACL semifinals three times in the last four years, will face Western Sydney at Campbelltown Sports Stadium in Leumeah, Australia, on Tuesday, and will try to stay alive in contention with a victory. A loss will eliminate Seoul from the ACL group stage for the first time in their club history.

Seoul are hoping their striker Dejan Damjanovic will finally start scoring goals. The Montenegrin is the third all-time leading scorer in the ACL but has just notched only one goal so far in this year's tournament.

"I know we're in a difficult situation, but I believe we still have a chance to qualify," Hwang said in a press conference. "I don't think it's going to be an easy match, but we will not give up."

Hwang added that they can play with "adventurous" tactics against Western Sydney since it is a must-win duel for them.

"Western Sydney have speedy players on the flanks and they make tireless runs, so we should be aware of that," he said. "This is the match in which we can't think of anything but winning. In order to achive that goal, we should play with some adventurous tactics." 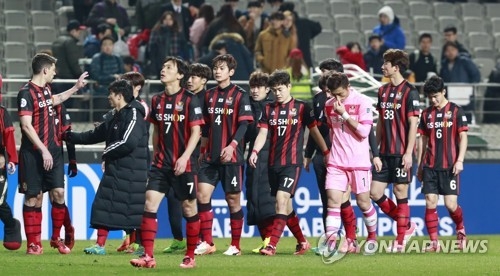 Elsewhere on Tuesday, Jeju United will try to secure the No. 2 position in Group H. They take on another Australian club, Adelaide United, at home.

Jeju, currently the leaders in the K League Classic with three wins and two draws, have four points in the group after collecting one win, one draw and one loss. They are five points behind Jiangsu Suning of China and one point above Gamba Osaka of Japan. Adelaide have just one point from one draw and two losses.

Jeju, making only their second ACL appearance, had an exciting 3-3 draw with Adelaide last month. They will rely on Brazilian forward Marcelo Toscano and attacking midfielder Lee Chang-min, who each have two goals, but midfielder Kwon Soon-hyung is expected to miss the match due to an ankle injury.

On Wednesday, Ulsan Hyundai and Suwon Samsung Bluewings return to ACL action, and will look to take the top position in their respective groups.

Ulsan, the 2012 ACL winners, are in third place in Group E with four points. Kashima Antlers of Japan are the leaders with six points, followed by Thai champions Muangthong United with five points. Brisbane Roar of Australia only have one point.

Ulsan can take the top spot if they beat Muangthong at Thunderdome Stadium in Nonthaburi, Thailand, and should Brisbane defeat Kashima. Ulsan and Muangthong played to a scoreless draw last month.

Suwon are in Group G with two-time ACL champions Guangzhou Evergrande, Kawasaki Frontale of Japan and Eastern SC of Hong Kong. Both Suwon and Guangzhou are tied at five points with one win and two draws, but the Chinese side sits atop the standings on a better goal difference.

Suwon will host the ACL debutants Eastern to chase their second win of the tournament. Seo Jung-won's side previously beat Eastern 1-0, but Suwon have yet to post a victory at home this season in both the ACL and the K League Classic. 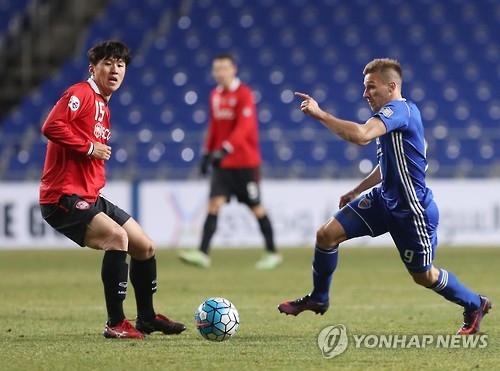