SEOUL, April 10 (Yonhap) -- The number of times fried chicken is being mentioned on South Korea's social media has increased at an average clip of 33 percent annually since 2011, an artificial intelligence firm said Monday, indicating it is fast becoming more of a South Korean comfort food than "jajangmyeon," or black bean sauce noodles.

The term was shared 34,828 times on social media on March 10 alone, marking the greatest number of times it was mentioned in a month and associated with public sentiment in favor of the Constitutional Court's decision on the same day to dismiss Park Geun-hye as president.

The upsurge in the number of times fried chicken has been mentioned on social media is interpreted as a move of people who had been calling for Park's resignation to post social media photos of eating fried chicken as part of expressing their joy over the court upholding her impeachment. 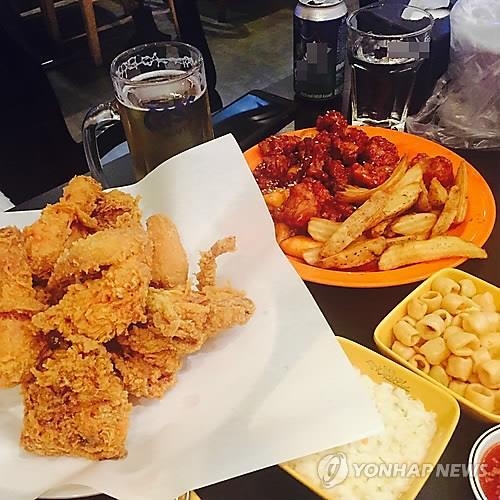 In contrast, the number of mentions of jajangmyeon, one of the most popular Korean-Chinese dishes, on social media was tallied at 274,662 last year, about 10 percent of the corresponding figure for fried chicken.

Even on April 14 last year, a special annual day called Black Day in South Korea when single people get together to wallow in their grief over bowls of jajangmyeon, the number of times the word was shared on social media dwindled to just 6,296, sharply down from the 17,587 a year ago. 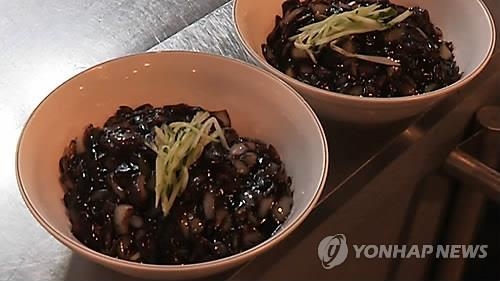 In South Korea, the habit of drinking beer with fried chicken has become a craze among many people since the smash-hit Korean drama "My Love from the Star" was aired in 2014, as people want to mimic its heroine, played by Korean top celebrity Jeon Ji-hyeon, who enjoyed "chimaek," a compound word combining chicken and "maekju," the Korean word for beer.

Besides romantic situations like the set in the drama, many South Koreans turn to fried chicken when they root for their country's team or pro teams in major sports competitions and share happy moments with their family members on a special day like a monthly payday.

Over beer and fried chicken, they also wash away their stress on Friday nights after a week of grueling and exhausting work.