PAJU, South Korea, April 10 (Yonhap) -- South Korea men's under-20 football coach Shin Tae-yong on Monday said the primary goal of his side at the upcoming FIFA competition at home is to reach the quarterfinals.

South Korea will host the FIFA U-20 World Cup from May 20 to June 11 in six cities. Shin's side will face Argentina, England and Guinea in Group A at the 24-team tournament. The top two teams from six groups will advance to the round of 16, along with four third-place teams.

"Our goal is to reach at least the quarterfinals," Shin said before the training at the National Football Center in Paju, north of Seoul. "We need to prepare throughly to achieve that goal."

With the tournament just 40 days away, Shin called up 25 players for April training for what many consider a provisional squad for the World Cup. The head coach previously said he is most likely to select 21 members from this squad unless unexpected situations, such as injuries, occur over the course of their preparations. The deadline for final entry is May 8.

"We will probably announce our final roster between April 28 and May 2," he said. "The reason why I picked more than 21 players is I want to keep the competition ongoing within this team." 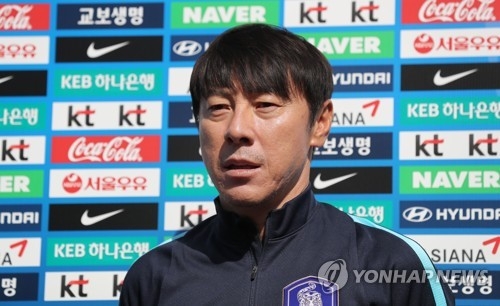 Shin said his starting members will be the players who can display their best performance in their respective positions. But for reserve members, the 46-year-old said versatility is the key.

"We're limited to select only 21 players, and that's why we need some players who can handle multiple positions," he said.

"Most of them haven't played with their respective clubs recently, so it's important to boost their strength and stamina," Shin said. "We will also have some practice matches once or twice a week to help the players find their rhythm."

South Korea won the four-nation U-20 football tournament at home last month over Honduras, Zambia and Ecuador. All three nations are also participants in the U-20 World Cup.

Shin, who coached South Korea at the 2016 Rio de Janeiro Summer Olympics, said the players have gained confidence through the FIFA U-20 World Cup test event, but they will work on fixing problems that emerged during the tournament.

"We showed some speedy attacks in that tournament, but our defense has to be organized," he said. "The FIFA U-20 World Cup is staged on our soil and we really need home fans' support to play good matches."