MOKPO, South Korea, April 10 (Yonhap) -- The South Korean government said Monday that it will disclose later this week detailed plans on how it will search for the remains of the nine missing victims from the salvaged Sewol ferry that has been placed ashore.

The government-led salvage team has transferred the ship onto a dry dock at the port of Mokpo from a semisubmersible transport ship Sunday, around three years after the ferry sank.

The team said placing special blocks to firmly position the ferry on top of the module transporter has been completed. Workers will start moving the transporters early Tuesday, with the aim to complete the move and final securing process later that same day, which will effectively end the salvage operation.

The ill-fated ferry has been submerged off the country's southwestern coast near Jindo Island since April 16, 2014. The tragedy left 304 people dead, with the remains of nine yet to be recovered.

The hull came ashore weeks after the government started to raise the wreck from the sea on March 22.

"We will first clean and disinfect the ship and then carry out thorough safety checks," said Lee Cheol-jo, the head of the operation team. "The detailed schedule for the search will be announced this weekend or early next week."

He said search parties will inspect every part of the ship to locate the remains of the victims.

At the same time, a separate search team of 31 divers was sent to the site of the sinking in search of any remains that may be lying at the bottom of the sea.

The search operation failed to find either the remains of the victims or their belongings. 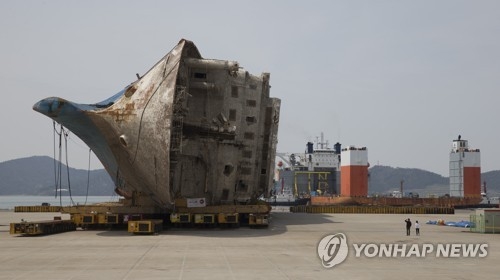