According to Keyeast Entertainment, Kim will release a new single in Japan on June 6 and hold a 16-city tour there, titled "Inner Core," starting the next day.

Kim, a member of the K-pop boy band SS501, was caught driving under the influence of alcohol on a street in Seoul's Songpa Ward around 1:55 a.m. on March 26, according to the police. His case was referred to prosecutors.

The 31-year-old, who served in the military from May 2015 to February this year, will also hold a fan meeting at Jamsil Olympic Hall in Seoul on April 29 as scheduled, Keyeast said.

Kim has been locked in a legal battle as his ex-girlfriend, identified only by her surname Choi, filed a suit in April 2015, seeking 1.6 billion won (US$1.45 million) in compensation. The plaintiff claimed that she miscarried his child in 2014 after being physically abused by Kim. 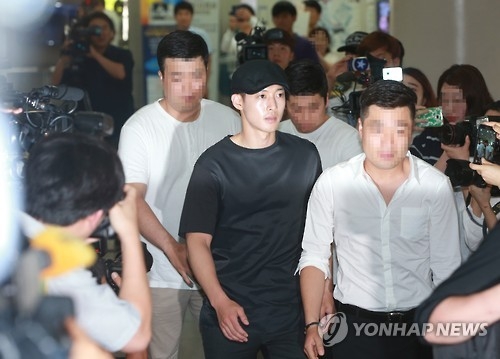