Vice Foreign Minister Lim Sung-nam and Ambassador Yasumasa Nagamine had a closed-door meeting, according to the ministry. Nagamine returned to Seoul from Japan on Tuesday following an almost three-month absence.

Speaking to reporters right after the meeting, Nagamine, however, didn't mention the statue issue. He said that the two discussed North Korea and agreed to advance bilateral ties based on the military information sharing pact signed last year and other cooperative efforts also involving the U.S. 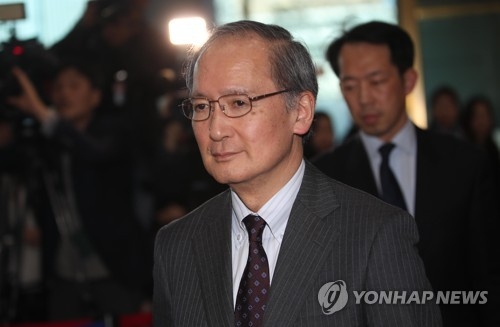 "Amb. Nagamine conveyed Japan's position on the girl statue issue," the foreign ministry said of the meeting. Japan has repeatedly called for the relocation of the bronze statue currently located close to the Japanese consulate in Busan.

Vice Minister Lim also "explained our government's stance and said both parties should respect the purpose and the spirit of the comfort women deal," according to the ministry.

They also discussed the two countries' joint response and future collaboration in coping with North Korea's nuclear and missile threats, the ministry added.

Historians estimate that up to 200,000 women, mostly from Korea, were forced to work in front-line brothels for Japanese troops during World War II. There are around 40 surviving South Korean victims who are mostly in their late 80s.

The comfort women deal is facing uncertainty as major presidential candidates hint at renegotiating or scrapping it when they take power. A new government is to take office after the May 9 presidential election triggered by the ouster last month of former President Park Geun-hye.