SEOUL, April 11 (Yonhap) -- In the mid-1980s, then South Korean President Chun Doo-hwan said that owning only a few nuclear weapons could be enough to induce North Korea to talks aimed at easing growing tensions on the Korean Peninsula, declassified diplomatic documents showed Tuesday.

Chun made the remarks in his meeting with Edward Rowny who came to Seoul on Oct. 15, 1986, as a U.S envoy. Rowny made a visit to brief the Seoul government on Washington's arms reduction negotiations with Moscow, according to the documents. 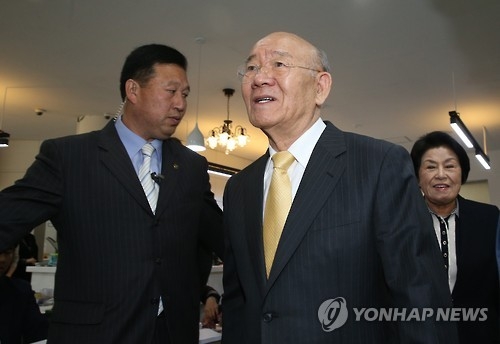 "As the U.S.-Soviet Union talks go well if the U.S. develops the SDI, the principle is the same that if we have just three nuclear weapons, the North would respond to calls for inter-Korean talks," Chun was quoted as saying in the documents.

The SDI or strategic defense initiative, also known as Star Wars, is a missile defense system the Ronald Reagan administration proposed in the mid-1980s to counter missile threats from the Soviet Union, its Cold War rival at the time.

Chun emphasized that South Korea didn't have a deep understanding of nuclear weapons since it owned none of them and that even if it had one, it would not use it. However, the army general-turned-president noted that Reagan's push for peace through strength in his early presidency helped induce the Soviet Union to the negotiation table on arms reduction.

"The communists would never respond to calls for negotiations unless they had weaknesses," he said.

Military tensions grew high at the time as inter-Korean talks came to a halt over the joint military drills conducted by South Korea and the United States.

Chun, who took power in a military coup on Dec. 12, 1979, is known to have promised to the U.S. not to develop nuclear weapons during a meeting with Reagan in Seoul in November 1983 in a bid to get recognition for his political legitimacy.