SEOUL, April 10 (Yonhap) -- EXID, the South Korean girl group of the hit track "Up & Down," has unveiled the music video for its new song "Night Rather Than Day."

The video for the song, included on the team's third EP album "Eclipse," was released at noon on Monday on YouTube along with the album's release via streaming services, according to Banana Culture Entertainment, the team's agency.

"Night Rather Than Day," an up-tempo R&B song, was co-produced by Shinsadong Tiger, KeeBomb and EXID member Eli.

The team's lead vocal Solji won't join other members in publicity activities for the group's new mini album. She is advised to take care of her health as she was diagnosed with hyperthyroidism in December.

"The main vocal part will be divided up between Hani and Hyerin," Banana Culture said. 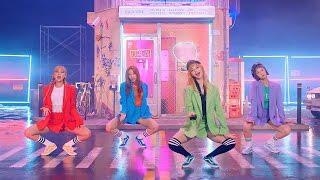