PAJU, South Korea, April 10 (Yonhap) -- South Korea's under-20 national team players said Monday they are focusing on improving their shortcomings to help their team at the upcoming FIFA competition.

South Korea will host the FIFA U-20 World Cup from May 20 to June 11 in six cities. The hosts are in Group A with Argentina, England and Guinea at the 24-team tournament. The top two teams from six groups will advance to the knockout round along with four third-place teams.

"I don't how much the team is completed at this point, but what's definitely sure is that we still need to improve," said Paik Seung-ho, one of 25 players selected by head coach Shin Tae-yong for April training. "Personally, I have to work on my decision-making skills during the match as well as my physical strength."

Paik, who is affiliated with FC Barcelona B, has been one of the top performers for the U-20 team. The 20-year-old attacking midfielder scored two goals at a FIFA U-20 World Cup test event last month, which featured Honduras, Zambia and Ecuador, and helped South Korea win the four-nation competition.

After the invitational tournament, Paik decided to stay in South Korea and work out on his own before the national team was assembled.

"I really think the U-20 World Cup gives me a good opportunity," he said. "It could be a turning point for my career."

Team captain Han Chan-hee said that he will try to make a positive atmosphere within the team by bridging the players and coaching staff. The Jeonnam Dragons midfielder said the players know that competition is inevitable in order to make it onto the 21-man roster. The deadline for final entry is May 8.

"Coach (Shin) told us that we need to make a better team and the players should have a friendly competition," he said. "Since I'm the captain, I need to show leadership and make the team atmosphere positive."

Han said the team chemistry is very good and he believes South Korea will perform better than they did at the four-nation tournament.

"We've been playing football together since we were young and we're all friends," he said. "We are not going to be satisfied with things that we did at the four-nation tournament. Since the U-20 World Cup will be played in front of home fans, we just want to enjoy playing football and work hard until the last moment." 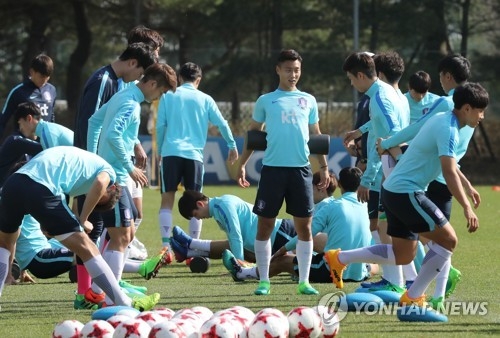 S. Korean footballers eager to improve shortcomings ahead of U-20 World Cup

S. Korean footballers eager to improve shortcomings ahead of U-20 World Cup