On the same day, prosecutors carried out their fourth round of questioning of Park at a detention center outside Seoul, where she is incarcerated, over a string of corruption allegations that removed her from office. They are planning to conduct one more interrogation on Wednesday before leveling formal charges against the country's former leader.

Though prosecutors said they cannot confirm if Wednesday's inquiry will be the last, legal experts say it is likely that they will indict Park before next Monday, when the official campaign period for the May 9 election begins.

Park was arrested late last month. She was named an accomplice in her longtime friend Choi Soon-sil's bribery allegations involving South Korea's largest business group Samsung. She is also suspected of colluding with her friend in pressing local conglomerates into donating tens of billions of won to two non-profit foundations allegedly controlled by Choi.

Both Park and Choi have denied the allegations. 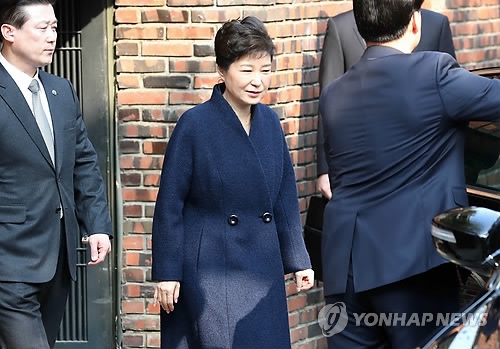 Prosecutors expected to wrap up Park's investigation this week

Prosecutors expected to wrap up Park's investigation this week