SEOUL, April 10 (Yonhap) -- South Korea's presidential front-runner Moon Jae-in on Monday expressed concerns over a possible U.S. strike against North Korea, saying there should not be any military action on the Korean Peninsula without Seoul's consent.

The presidential candidate of the liberal Democratic Party also vowed to stop any armed conflict from breaking out on the peninsula.

"The recent conditions surrounding the peninsula are unstable. North Korea's provocation continues while surrounding countries are showing signs of trying to take advantage of the current vacancy in the office of the South Korean president and resolve issues related to the peninsula without South Korea," Moon wrote on Facebook.

Moon's remarks followed a recent summit between the U.S. and Chinese leaders in which the two discussed ways to rid North Korea of its nuclear weapons.

"If I am elected, I will visit the United States at the earliest date possible and discuss ways to fundamentally resolve the North Korean nuclear issue," the leading presidential candidate said. 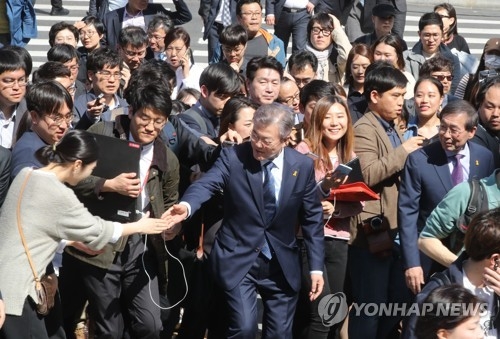 Before his bilateral summit with China's Xi Jinping, U.S. President Donald Trump said all options, apparently including military strikes, were on the table in dealing with the communist North.

Moon insisted any military action must first be cleared by South Korea, noting the country and its people will suffer the most should an armed conflict ever take place.

"We must be the host in dealing with issues related to the Korean Peninsula. We must lead the efforts to solve problems related to the peninsula and our allies and neighboring countries, including the United States, should take on a role to support our leadership," he said.

Moon, who is often said to be pro-North Korea, also warned Pyongyang against any future provocations, saying such a move will threaten its very existence.

"Immediately following a provocation, North Korea will not be able to ensure its existence," Moon wrote.

He also lodged a complaint against Beijing's apparent economic retaliation against Seoul for the latter's ongoing deployment of a U.S. missile defense system, the Terminal High Altitude Area Defense, or THAAD, though he has repeatedly hinted at seeking to scrap the installation if elected.

"I strongly call on China. The decision on the THAAD deployment is a matter of South Korea's sovereignty, and any economic retaliation against the deployment must immediately stop," Moon said.

"I, Moon Jae-in, will be a president that (North Korean leader) Kim Jong-un fears the most, a president the United States trusts the most and one that China may believe in the most," he said. "Issues related to the Korean Peninsula are our problems, and are international issues at the same time, and so I will not neglect my duty to resolve such issues under close cooperation with our ally, the United States, and our important neighbors China, Japan and Russia."