SEOUL, April 10 (Yonhap) -- South Korean girl group EXID made a comeback on Monday with its third EP album titled "Eclipse" while temporarily realigning itself into a four-member team amid member Solji's health issues.

"The title of the album signifies EXID's change as artists and its commitment to return to a fully formed team after Solji's return," member LE told reporters at a media event held at Blue Square Samsung Card Hall in central Seoul.

The album, the group's first new material since "L.I.E" released in June of last year, contains five new tracks, including title track "Night Rather Than Day." It also includes an instrumental version of the title track, co-produced by Shinsadong Tiger, KeeBomb and EXID member LE.

"It's an up-tempo R&B song with a vintage sound. The song is about the fact that nights are more leisurely and relaxing compared to the hectic daytime," member Hyerin said.

The team's lead vocal Solji has excused herself from the group after being diagnosed with hyperthyroidism in December.

Perhaps it's coincidence but with Solji's absence, "Night Rather Than Day" failed to grab the limelight upon release, only reaching as high as 79th on Melon, the largest music streaming service, as of the press event.

Given the void to fill with Solji's absence, it still remains open to question if EXID as a quartet will ever be able to make as strong a track as "Up & Down" again. But the members were confident that their title track will do better.

"For me, the song became my favorite track among EXID songs. I think it'll go up higher on the charts. I look forward to it," said Hani.

LE, who is the team's primary songwriter, said the group initially recorded a song together with Solji but later had to write another track after Solji's diagnosis.

"We made a new song amid the team suddenly becoming a four-member group. We worried a lot but I think it turned out better than expected," LE said.

EXID was formed in 2012 only to release a series of unsuccessful singles until it rose to prominence in 2014 as the mega hit number "Up & Down" rode a wave of "contraflow sensation," a rare performance the single showed on most of the domestic charts by peaking at No. 1 after its debut and subsequent swift demise on the top 100. 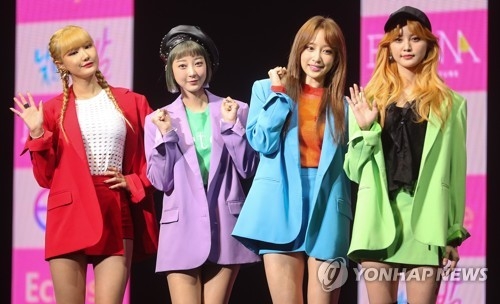 EXID out with third EP through temporary shake-up

EXID out with third EP through temporary shake-up