(ATTN: UPDATES with more info from 2nd para; COMBINES with a previous story moved with the slug China-nuke envoy)

The warning came after chief negotiators on the North's nuclear program from the two countries met in Seoul amid growing concerns that the North may carry out its sixth nuclear test and launch an intercontinental ballistic missile this month.

"Both the South Korean and Chinese sides shared the urgency and gravity of the North Korean nuclear problem ... and reached a shared understanding that sanctions and pressure, including thorough implementation of U.N. Security Council resolutions, should be steadily intensified in the face of North Korea's continued provocations," South Korea's Kim Hong-kyun said after his talks with Wu Dawei.

"We shared the view that strong, additional measures should be taken if North Korea pushes ahead with strategic provocations like a nuclear test or an ICBM launch in defiance of international warnings," Kim said.

Seoul officials believe the North is ready to conduct another nuclear detonation at any time upon the final decision by its leadership. The country is presumed to be just a few tests away from completing its nuclear weapon program.

"In the midst of the growing possibility of North Korean provocations, the latest visit by Wu Dawei to Korea is very timely in terms of sending a strong warning to North Korea," Kim said.

At a summit in Florida last week, U.S. President Donald Trump and Chinese President Xi Jinping reaffirmed their commitment to the denuclearization of the Korean Peninsula and vowed international cooperation to implement U.N. Security Council resolutions against the North.

During the talks on Monday, the two sides again collided over China's retaliatory economic actions over the deployment of the U.S. defense shield, the Terminal High Altitude Area Defense (THAAD), in South Korea.

The South Korean side requested the immediate halt to China's punitive actions, but the neighboring country only reiterated its opposition to the deployment, Kim said.

During the talks, they also agreed to meet again in Beijing to discuss multilateral cooperation on the North Korean issue although the final date has yet to be set. They last met in Beijing in December.

The Chinese official arrived in Seoul earlier in the day. During his stay for four or five days, Wu plans to meet major presidential candidates or their campaign officials to exchange views on key diplomatic issues concerning the two countries ahead of the May 9 election. 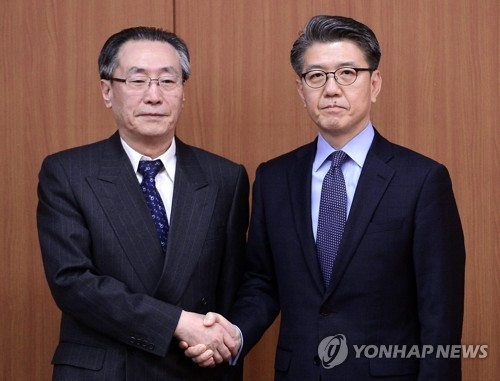