SEOUL, April 11 (Yonhap) -- North Korea vowed Tuesday to take the "toughest" counteraction against the United States as Washington is sending its strategic assets near the Korean Peninsula for what the North calls an invasion of Pyongyang.

The North's warning was made after the U.S. dispatched the USS Carl Vinson, a nuclear-powered aircraft carrier, again to waters off the divided peninsula amid signs of the North's provocations.

North Korea's foreign ministry warned that the country is ready to take the toughest actions to defend itself with powerful weaponry against what it calls Washington's provocations.

"We will hold the U.S. wholly accountable for the catastrophic consequences to be entailed by its outrageous actions," a ministry spokesman was quoted as saying by the Korean Central News Agency (KCNA).

Tensions on the peninsula have heightened amid speculation that North Korea may conduct its sixth nuclear test or launch a long-range rocket around its key anniversaries in April.

Concerns about a possible pre-emptive U.S. strike against North Korea are growing as well.

U.S. National Security Advisor H.R. McMaster told Fox News that President Donald Trump has ordered him to prepare "a full range of options" to respond to nuclear and missile threats North Korea poses to Washington and its allies.

"The prevailing grave situation proves once again that (North Korea) was entirely just when it increased in every way its military capabilities for self-defense and pre-emptive attack with a nuclear force as a pivot," the spokesman said.

Rodong Sinmun, the North's main newspaper, warned that it can carry out a pre-emptive attack against the U.S.

"We are ready to counter any type of an aggression war. It will be desirable for (the U.S.) to ditch its plan of preemptive strikes (against us) to a trash can," the newspaper said in a commentary.

The North was referring to South Korea's test-firing of a new 800-kilometer-range Hyunmoo-type ballistic missile that can reach anywhere in North Korea.

"This is a brazen-faced stance quite different from its reaction to the routine rocket firing exercise of the KPA," a spokesman for the General Staff of the KPA said.

This series of bellicose North Korean rhetoric comes as Seoul and Washington are conducting their two-month-long joint military drills that will wrap up at the end of this month.

Pyongyang has long denounced the exercises as war rehearsals for a northern invasion despite Seoul and Washington's assurances that they are defensive in nature.

"The military exercises are aimed at countering North Korea's nuclear and missile threats," said an official at South Korea's unification ministry. "The purpose is to maintain peace and stability on the peninsula." 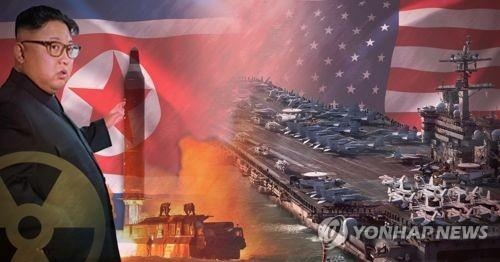