The motor show, held every other year, begins with a press day on April 19 and runs till April 28. Three South Korean car manufacturers -- Hyundai Motor, its sister firm Kia Motors and Ssangyong Motor -- are participating.

Hyundai is scheduled to unveil a small SUV, a strategic model for Chinese customers, at the show. The car's specifications, tailored exclusively for China, will be released on the day of the unveiling. The company's exhibit will display 19 models, including its new green concept car, named the FE.

Kia is debuting two new cars at the show, a small sedan and a crossover utility vehicle, also aimed specifically at Chinese customers. Its exhibit will showcase 21 models, such as a racing car that competed in the China Touring Car Championship.

Ssangyong will display six models at its exhibit, including the Tivoli and the new Korando C.

Industry officials say that despite the ambitious preparations for the motor show, the efforts are overshadowed by the dispute between Seoul and Beijing over South Korea's decision to deploy a U.S. anti-missile defense system on its soil. China fiercely opposes the move as a challenge to its own security and has taken retaliatory actions against South Korea, instigating a boycott of South Korean products by its people.

The latest data said Hyundai-Kia sales in China in March fell 52.2 percent on-year, with Hyundai Motor due to open its fifth manufacturing plant in China this year and Ssangyong trying to advance into the Chinese market. 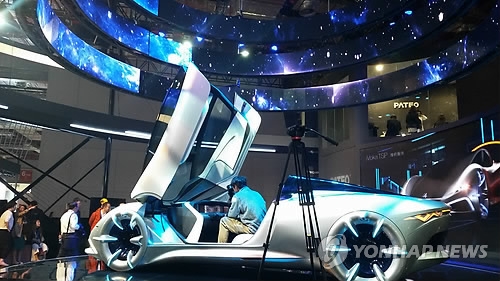