SEOUL, April 11 (Yonhap) -- Presidential front-runner Moon Jae-in on Tuesday pledged to scrap plans to build additional nuclear power reactors at least in the densely populated southeastern part of South Korea, and instead build a new airport there to help boost the local economy.

The presidential candidate of the liberal Democratic Party said he will halt the construction of two new nuclear reactors at Kori Nuclear Power Plant, located just outside of Busan.

Moon was referring to the New Kori Reactors 5 and 6, which were given final approval for construction by the Nuclear Safety and Security Commission in June 2016.

The planned construction would increase the total number of reactors at the Kori complex to 10, more than one third of all nuclear reactors in the country.

South Korea currently operates 26 nuclear reactors, with 14 of them located in North and South Gyeongsang provinces, according to Moon. The 26 reactors generate about 30 percent of the country's overall power supply.

Moon said if elected, he will also block any extension of operations for aged reactors at the atomic power plant located some 450 kilometers southeast of Seoul. 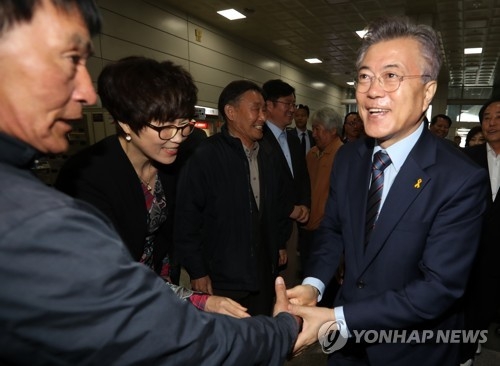 The promises came as part of Moon's election pledges for Busan and the surrounding South Gyeongsang Province, and it was not clear whether the presidential candidate planned to apply the same standards for other nuclear power facilities across the country.

Moon, a native of Geoje island in South Gyeongsang Province, also vowed to work to revitalize the local economy, including building a new, expanded airport for Busan, the country's second-largest city.

Amid a continued slump in the shipbuilding industry, Busan's share in the country's overall gross domestic product has dipped to 3 percent in 2016 from 25 percent in 1975, he noted.

"There is a need to build an airport that will work as a gateway for passengers to and from the Southeast Asian region and meet the growing demand for air travel," Moon's election camp said in a press release.

The election pledges were announced in a series of press conferences held in Busan and Changwon, an industrial city located west of Busan in South Gyeongsang Province.

Moon said the airport, along with new seaports in the region, will help turn the area into an East Asian logistics hub.