SEOUL, April 11 (Yonhap) -- North Korea and Syria have reaffirmed efforts to step up relations in their recent exchanges of congratulatory messages on key anniversaries as the recent U.S. strike at a Syrian air base alarmed the countries.

"The friendly two countries are celebrating this anniversary and, at the same time, conducting a war against big powers' wild ambition to subject all countries to their expansionist and dominationist policy and deprive them of their rights to self-determination," the KCNA quoted the Syrian messages as saying. 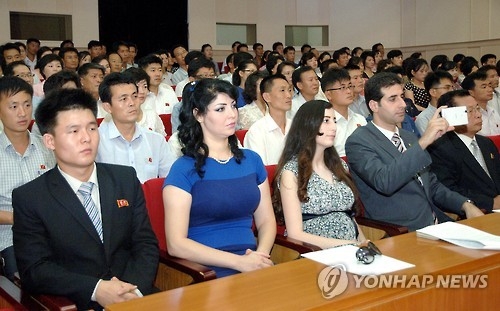 "The two peoples of Syria and the DPRK are as ever struggling for their rights to self-determination and national sovereignty and the security and prosperity of their countries," the messages said in what could possibly be an insinuation about the U.S. air strike on Friday.

The KCNA also said the messages "expressed belief that the relations of friendship and cooperation between the two countries would grow stronger in conformity with the interests of the two peoples."

The missile attack was in response to the Syrian government's use of chemical weapons on its civilians and raised an alarm that military forces might also be used by the U.S. in dealing with a recalcitrant North Korea.

The Syrian messages followed a similar telegram by Kim Jong-un sent to the Syrian president last Thursday on the occasion of the 70th anniversary of the founding of the ruling Ba'ath Party there.

In the message, Kim voiced support for the Syrian government and vowed tighter consolidation between the countries.

During the reign of former North Korean leader Kim Jong-il, North Korea reportedly provided an array of weapons technology to Syria and the friendly relations have continued into today.