SEOUL, April 11 (Yonhap) -- K-pop idol group BTS or Bangtan Boys has been nominated for the "Top Social Media Artist" of the Billboard Music Awards 2017, the organizer unveiled on its website on Monday.

The popular boy band will compete with Justin Bieber, Selena Gomez, Ariana Grande and Shawn Mendes. It is the only Korean artist on the nominee list.

The Billboard said they were picked based on "key fan interactions with music, including album and digital songs sales, streaming, radio airplay, touring and social engagement." The winner will be determined partly based on the result of an online vote slated for May 1.

Since October last year, BTS has ranked first 19 times on the list of the "Social 50" chart of the most influential and active artists on the world's leading social media sites.

Last month, the group wrapped up its tour in North America. Starting from April 22, it will meet Asian fans in six cities including Bangkok and Manila throughout early July.

The awards show will take place in Los Angeles at 8 p.m. local time on May 21. 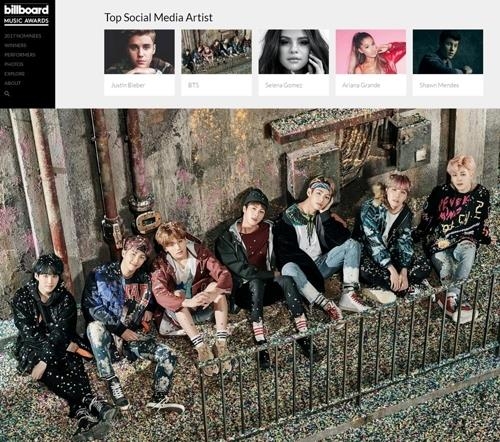