During a Cabinet meeting, Hwang also stressed the need to strengthen the country's vigilance posture against the North "based on the South Korea-U.S. security alliance."

Experts say that the wayward regime could conduct nuke and missile tests to mark its major events such as its parliamentary session this week, the 105th anniversary of its founder Kim Il-sung's birthday on Saturday and the 85th anniversary of the foundation of its Korean People's Army on April 25.

"What is more important than anything else is to cope with pending diplomatic and security issues with calm and consistency," Hwang said. "In time for various events such as the North's parliamentary session that began today, Pyongyang could carry out a grave provocation." 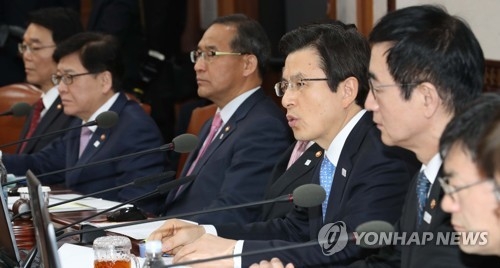 The acting president also ordered the government to thoroughly examine volatile international geopolitical and economic situations to prevent them from having any adverse impact on South Korea.

"Tensions between major powers have flared up following the U.S. military's action over the use of chemical weapons in Syria, and uncertainties over the global economy and trade have increased with weakening international cooperation over free trade," Hwang said.

"Particularly at this juncture, the government and all citizens have to squarely face the current situation and thoroughly cope with them."

Touching on the May 9 presidential vote, Hwang renewed calls for concerted efforts to ensure the election is held in a "transparent and fair" manner. He also stressed the need to sternly deal with election crimes such as inaccurate and biased opinion polls.