SEOUL, April 11 (Yonhap) -- The number of bars and pubs in South Korea has steadily declined in recent years, government data showed Tuesday, amid a protracted economic slump that is affecting the country's drinking culture.

Industry figures showed a 6.1 percent dip to 55,761 in January from 59,316 from a year earlier, according to the statistics released by the National Tax Service (NTS).

By region, the southeastern industrial city of Ulsan witnessed the biggest drop in the number of bars with numbers hitting 10.9 percent, followed by Incheon at minus 10.1 percent and Seoul with a 7.8 percent decrease.

The decline is attributed to the economic slump leading to the reduction in the company get-together drinking gathering. The rise in the number of people drinking at home also played a part in the change, industry sources said.

Sales at drinking houses have dropped continually since 2014, according to data by Statistics Korea. The only exception was in June 2016 when sales posted a 3.8 percent rebound on-year.

The number of coffee shops, meanwhile, rose 20.1 percent to 38,202 in January from a year earlier. Sales at coffee shops have been steadily rising since 2015. 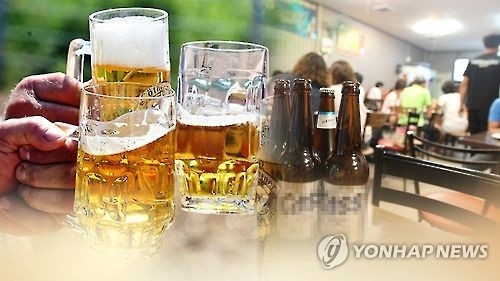