SEOUL, April 11 (Yonhap) -- A Seoul court held a hearing Tuesday to decide whether to issue a warrant to arrest a former presidential aide in connection with a corruption scandal that led to the ouster of President Park Geun-hye.

Woo Byung-woo, former senior presidential secretary for civil affairs from 2015 to 2016, appeared at the Seoul Central District Court to attend the hearing that began at 10:30 a.m. The court is expected to make a decision late at night or early the next morning.

The former aide of the ousted president is accused of aiding and abetting her longtime friend Choi Soon-sil in meddling in state affairs.

Prosecutors suspect that Woo tried to disrupt a special presidential inspector's investigation into the scandal and interfered with personnel issues of government officials.

It marked the second time for the ex-presidential aide to stand before a judge to avoid an arrest over his alleged involvement in the scandal, which eventually led to Park's detention late last month. 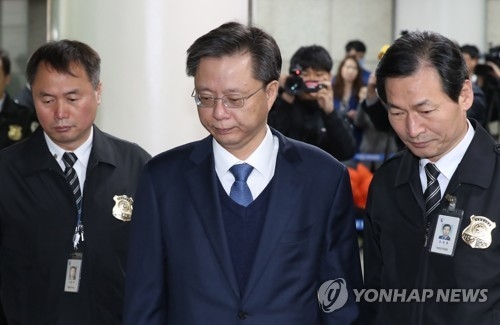 Court holds hearing on arrest of ex-presidential secretary over scandal

Court holds hearing on arrest of ex-presidential secretary over scandal