If elected, the presidential front-runner said, he will completely remove the 11,000 won (US$9.63) basic monthly fee charged to all mobile phone users.

"And yet, the three mobile phone service providers posted a combined operating profit of 3.6 trillion won last year," he told a press conference held in Changwon, an industrial city located some 450 kilometers southeast of Seoul, according to the party.

"Consumers are bombarded with excessive fees, while telecom companies continue to enjoy excessive profits," he was quoted as saying. 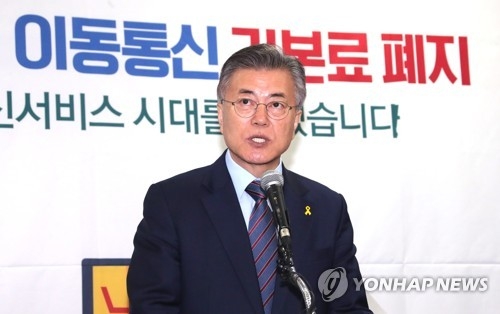 Moon argued that the basic monthly fee was intended to support the installation of mobile communications networks, but facility investments related to such networks have already been completed.

Moon's seven-point election pledge regarding communication services included an immediate removal of a current ceiling on subsidies provided on new phones by manufacturers or service providers.

The presidential candidate noted the ceiling made new phones, including those manufactured in the country, up to 21 percent more expensive here than in other countries. The ceiling was a temporary measure aimed at preventing excessive competition, and is set to expire in October.

Moon noted a reason for such a high communications fee was the high cost of the mobile data service.

He said he will require all public facilities and government offices to provide free Wi-Fi services, while also encouraging mobile service providers to lower their service charges.

The presidential candidate also vowed to work for a three-way agreement with China and Japan to introduce free roaming services for all their travelers visiting one another.