SEOUL, April 11 (Yonhap) -- South Korea's global ranking in tourism competitiveness has jumped to 19th this year, backed by an improvement in market openness and infrastructure, a report showed Tuesday.

The global ranking of Asia's fourth-largest economy moved up 10 spots in 2017 compared with two years earlier, tagging along with top tourist destinations in Europe, North America and Oceania, according to a biennial report by the World Economic Forum (WEF) released by the Ministry of Culture, Sports and Tourism.

The Travel & Tourism Competitiveness Report assessed a total of 136 countries based on their competency in policies, infrastructure, services and market openness in light of tourism development.

The rise in Korea's ranking came on the back of good policy-making that prioritized tourism and investment in infrastructure, which served to better the reputation as a place to visit for foreigners, the ministry said.

Eased visa requirements and an increase in bilateral air service agreements with foreign counterparts were added as strengths in the assessment of market openness.

"The finding on Korea's tourism reflects our efforts toward improving the overall quality of services and programs. We will continue to work to strengthen the industry by revitalizing in-country travel, as well as diversifying the inbound tourist portfolio," a ministry official said.

In contrast, Korea still lagged behind in terms of environmental stability. It saw its ranking in fine dust management hover in the lowest level at 130th, with the assessment on access to drinking water coming in at 65th.

Spain, France and Germany retained their top three spots in a row from 2015, followed by Japan that climbed five spots to fourth over the cited period.

Among others included China, which placed 15th, trailing behind the United States in sixth and Australia in seventh, the report showed.

South Korea came in 42nd when the WEF first released its findings in 2007, climbing its way up to 25th in 2013, according to the report. 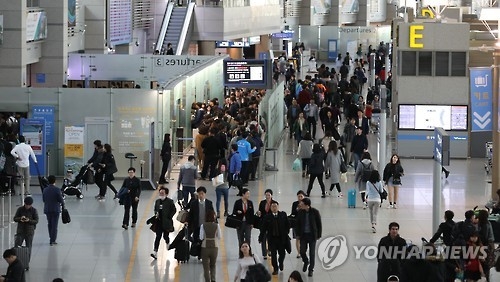