The designation of Korean Culture Day came after a Koreatown was formed in 2010 in Bom Retiro, a densely populated area in Sao Paulo.

Sao Paulo's Mayor Joao Doria signed a document on the designation of the culture day on Friday as he met with South Korean Consul General in Sao Paulo Hong Young-jong, representatives of a group of South Korean residents and South Korean businesspeople.

Doria was also quoted as saying during the meeting that he will push ahead with a project to make Bom Retiro "Little Seoul."

Under the project, the Brazilian city government will install monuments symbolic of South Korea, set up places to promote Korean foods and products and give support to Korean artists taking part in cultural exchanges with their Brazilian counterparts, according to the officials.

Hong expressed thanks to Doria for his support for the Korean community and expected that the designation of Korean Culture Day will deepen cooperation and exchanges between the two countries.

The South Korean resident group, meanwhile, plans to hold this year's "Korean Culture Day" event, the 11th of its kind, for Aug. 11-12 in Koreatown. 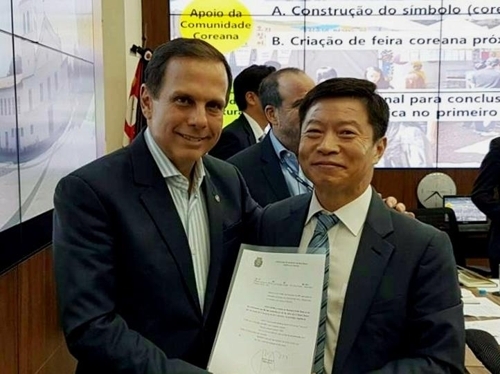