SEOUL, April 11 (Yonhap) -- South Korea's military called Tuesday for the accurate evaluation of the security conditions on the peninsula in response to rumors of a looming war crisis.

Public concern has grown here about the possibility of an armed conflict in April amid the spread of related rumors on social networking sites and "jjirashi," which are leaflets of unconfirmed private information.

The Ministry of National Defense cautioned the people against being "misled" by such groundless information.

Speaking at a press briefing, the ministry's spokesman Moon Sang-gyun described it as an "overblown assessment."

Public anxiety about a possible war in Korea has been fueled by the Donald Trump administration's recent air strike against Syria amid the North's continued saber-rattling.

The international community is concerned that the North will soon press ahead with another nuclear test and a long-range missile launch. 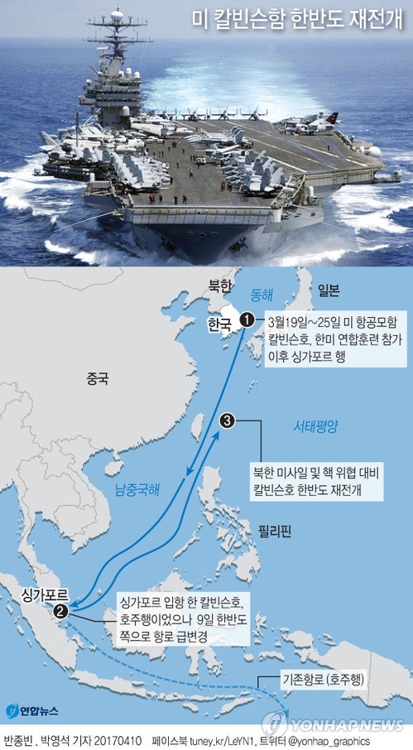 The Ministry of Foreign Affairs also dismissed the rumor as "groundless."

"The rumor of an April crisis on the Korean Peninsula which has recently circulated in private leaflets is groundless," spokesman Cho June-hyuck said in a press briefing.

Dispatch and operation of the U.S. military's strategic assets close to the South Korean Peninsula are in response to North Korean threats and discussed closely between South Korea and the U.S., he said, rebutting the rumor triggered by a recent U.S. decision to relocate its Carl Vinson Strike Group to waters near the peninsula.

"The U.S. has made it clear that there will be no new policy or action without prior consultation with us, the direct party in the matter," Cho said.