The Korea Football Association (KFA) said the U-20 team will have a friendly match with Jeonbuk Hyundai Motors on April 26 in Jeonju, North Jeolla Province, to check their preparations for the FIFA U-20 World Cup which will be staged from May 20 to June 11 in six local cities.

Jeonbuk won the Asian Football Confederation (AFC) Champions League last year, but were expelled from this year's competition following a bribery scandal involving one of their scouts. Jeonbuk are currently second in the top-flight K League Classic this season.

The KFA said the officials are planning to host the friendly match at Jeonju World Cup Stadium, where South Korea will play two matches at the U-20 World Cup.

South Korea are paired with Argentina, England and Guinea in Group A at the 24-team FIFA tournament. The hosts open the tournament on May 20 with Guinea at Jeonju World Cup Stadium before taking on Argentina at the same venue three days later.

South Korean U-20 football coach Shin Tae-yong previously said his side will have one or two friendly matches every week before the World Cup.

Before the Jeonbuk friendly, Shin's side will meet with Myongji University on Friday at the National Football Center in Paju, Gyeonggi Province, before playing against Suwon FC, a club in the second-tier K League Challenge, in Suwon, Gyeonggi Province, five days later.

Shin called up 25 players for April training and he will have to cut at least four players to finalize his squad for the U-20 World Cup. The deadline for the 21-man final entry is May 8. 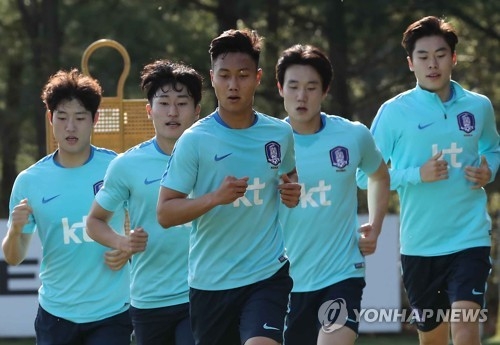