SEOUL, April 11 (Yonhap) -- South Korea's presidential race increasingly took on the form of a legal battlefield Tuesday as each major candidate engaged in litigation to clear their name.

With the election four weeks away, the political landscape has shaped up to become a duel between two liberals fighting to take power in the wake of a corruption scandal and subsequent removal of conservative President Park Geun-hye from office.

Moon Jae-in, the longtime front-runner and former leader of the liberal Democratic Party, has faced a growing challenge from Ahn Cheol-soo of the center-left People's Party amid surveys indicating the conservative electorate will choose a maverick lawmaker over someone they regard as an avatar of the late liberal icon and former President Roh Moo-hyun.

The intensifying battle for the top elected office has somewhat blurred the line between vetting and downright mudslinging, giving rise to a legal tit-for-tat.

On Friday, Moon's camp pressed charges against a lawmaker of the conservative Liberty Korea Party for spreading what it said were false rumors that the candidate's son received special favors to land a job at the state-run Korea Employment Information Service in 2006. Moon, who was then the senior presidential secretary for political affairs, has repeatedly denied the charges by citing a labor ministry investigation that found no wrongdoing in the hiring process.

The lawmaker Shim Jae-chul vowed to respond in kind through legal action.

The allegations took on a new dimension this week when another lawmaker, this time of the splinter conservative Bareun Party, claimed there was a separate "final report" on the labor ministry's investigation. Ha Tae-keung earlier argued that although the investigation failed to verify the alleged special treatment, the labor ministry took issue with the way the job opening was announced and imposed disciplinary measures on officials of the employment service center who were involved. 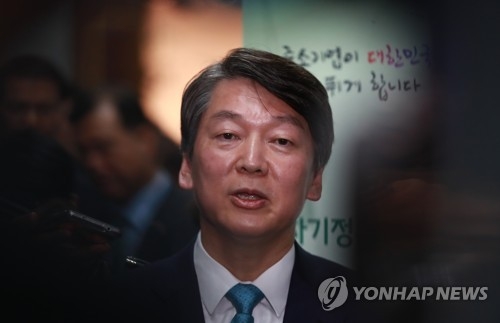 The ongoing wrangling over the alleged special treatment apparently dealt a blow to Moon's approval ratings. In a Korea Research Center survey published Sunday, Ahn overtook Moon for the first time in a hypothetical five-way race, with 36.8 percent against Moon's 32.7 percent.

The center-left lawmaker has been dealing with his own set of negative allegations.

The latest headache centers on charges his wife gave birth to their daughter in the United States to enable her to win U.S. citizenship (she holds dual citizenship there and in South Korea) and that she studied abroad in lavish conditions.

Ahn's campaign rejected the allegations and filed a formal complaint with the prosecution Monday.

"Spreading false rumors on the Internet about Seol-hee constitutes a clear violation of communications and election laws," Kim Kyung-jin, chief spokesman of Ahn's party, said in a statement. "We have pressed charges against (the netizens) involved with the prosecution."

Experts attributed the growth of negative campaigning to its disproportionate influence on voter sentiment.

"It's an inevitable aspect of elections," said Shin Yul, a politics professor at Seoul's Myongji University. "This is just a preview as each party will start coming out with their revelations next week."

Yoo Yong-hwa of Hankuk University of Foreign Studies agreed that the public tends to react sensitively to such negative allegations.

"Unlike in the past, it's hard not to engage in negative campaigning because with advances in the Internet, once (the rumors) spread online, everyone believes them," he said. "It'll just become more intense. It's effectively a war."

While the two leading candidates have been busy defending themselves, one contender who claims to be the standard-bearer of the conservative camp has become the subject of litigation himself.

Hong Joon-pyo, the nominee of the Liberty Korea Party, resigned as governor of South Gyeongsang Province just before midnight Sunday to prevent a by-election for his successor to be held on the same day as the May 9 presidential poll.

The next morning, a senior member of the Democratic Party's provincial chapter filed a compensation suit worth some 30 million won (US$26,000) with a local court to hold Hong responsible for depriving locals of their political rights and his own right to run for the office until the regular gubernatorial election in June 2018.

Hong's legal battle is in fact much larger as the firebrand prosecutor-turned-politician has yet to receive the final ruling from the Supreme Court on charges he took bribes from a businessman in a high-profile lobbying scandal.

His approval rating has hovered below 10 percent.