BUSAN, April 11 (Yonhap) -- Two vessels belonging to the Pacific Fleet of the Russian naval forces made a port call Tuesday at the South Korean coastal city of Busan as part of a regular exchange program with the South Korean Navy.

The call at the port of South Korea's Naval Operations Command by the guided-missile cruiser Varyag and the tanker Pechenga, both 11,000-ton vessels, was the second this year to be made by Russian warships.

The two vessels will stay in Busan for four days, with crew members to take part in exchange and volunteer activities with their South Korean counterparts.

Commissioned in 1989 for the Soviet Navy, the Varyag features an array of deadly anti-ship, anti-sub and anti-aircraft weaponry, carries 520 crew members and has the capacity to sail at a maximum of 59 kilometers per hour.

South Korea's Naval Operations Command has promoted exchange programs with the United States, Russia and other major countries to discuss ways to enhance its rescue operations in maritime accidents and expand exchanges and cooperation. 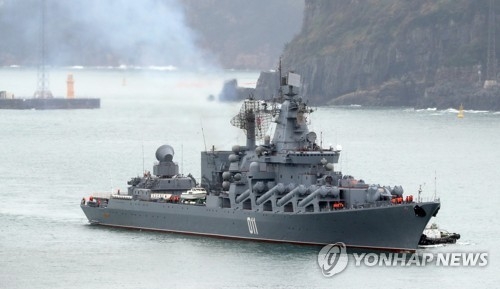