SEOUL, April 12 (Yonhap) -- A court on Wednesday refused to issue an arrest warrant for a former presidential secretary implicated in an influence-peddling scandal that removed President Park Geun-hye from office.

Prosecutors on Sunday asked the Seoul Central District Court to issue the writ to detain Woo Byung-woo, senior presidential secretary for civil affairs from 2015 to 2016, on charges of abuse of power, dereliction of duty and perjury.

The court, however, said it cannot acknowledge the reason and necessity for the arrest.

"The allegations raised against him are debatable and based on the probe result and evidence gathered so far, it is hard to accept the possibility of him destroying evidence or fleeing," it said.

The same court also refused to approve his arrest sought by an independent counsel team in February.

"We will decide whether to seek the warrant again after thoroughly reviewing the reasons for the rejection," the prosecution said.

The former aide of the ousted president is accused of aiding and abetting her longtime friend Choi Soon-sil in meddling in state affairs and amassing profits using her ties to Park. Woo has denied any wrongdoing.

Prosecutors suspect he tried to disrupt a special presidential inspector's investigation into the scandal and interfered with the personnel issues of government officials.

He is also accused of lying under oath at a parliamentary hearing when he denied intervening in a prosecution probe into failed rescue efforts during the 2014 sinking of the Sewol ferry.

Though they could not put Woo under arrest, prosecutors are expected to indict him along with Park later this week, before the official campaign period for the May 9 presidential election begins Monday.

Park was arrested late last month in a number of criminal cases including her friend taking bribes from South Korea's largest business group Samsung. Choi and several former aides of Park are under detention. 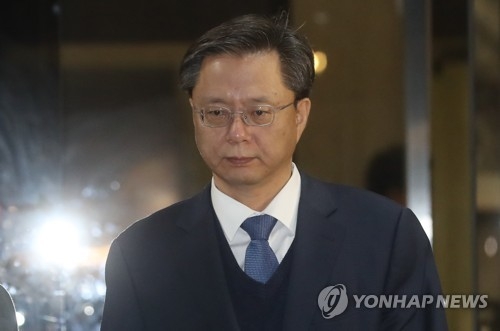