The SPA, North Korea's legislative body, is the highest organ of state power under the constitution, but it actually rubber-stamps decisions by more powerful organizations, such as the ruling Workers' Party of Korea (WPK).

The KCNA said that Ri Su-yong, former top diplomat and current vice chairman of the WPK's central committee, was elected to head the SPA Diplomatic Commission.

"North Korea appears to be trying to use the commission as a main organ to handle relations with South Korea and the external world in a bid to get out of its deepening international isolation," said Cheong Seong-chang, a senior research fellow at the Sejong Institute.

He said that after South Korea's presidential election in May, the North is expected to aggressively mount a charm offensive to improve its ties with the outside world.

The meeting came amid speculation that North Korea may conduct its sixth nuclear test or launch a long-range rocket around key anniversaries in April to celebrate its internal political events.

Concerns are growing that the U.S. may seek a pre-emptive attack on the North similar to its latest airstrike against Syria.

But there was no message from the North's leader regarding the U.S. or South Korea at the parliamentary meeting, according to the state-run TV broadcaster.

North Korea also did not name a new spy chief to fill the vacancy left by the dismissal of Kim Won-hong earlier this year.

South Korean experts raised the possibility that a new spy head would be named to replace Kim, who also doubles as a member of the newly created State Affairs Commission (SAC).

Kim, 72, was fired from the post of spy chief in mid-January after a probe by the WPK found his agency had abused its authority, according to Seoul's unification ministry.

Every April, the SPA holds a plenary session, attended by hundreds of deputies, to approve the budget and personnel changes.

But the last assembly meeting was held in June 2016 after the first party congress in 36 years in May. At last year's assembly session, Kim was elected as chairman of the SAC, which replaced the National Defense Commission.

On Tuesday, North Korea said it plans to spend 15.8 percent of this year's budget on national defense, almost the same proportion as last year, the report showed.

The country's state budget spending is expected to grow 5.4 percent this year from 2016, but it did not unveil the total amount.

Pyongyang said it will sharply increase spending on public health, education and science this year, a move which appears to highlight the image of a leader caring for the well-being of its people. 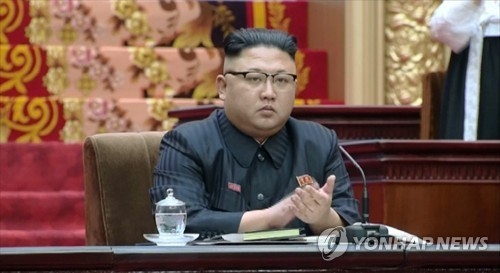