He was supposed to attend the Armed Service Committee hearings to be held later this month for testimony, a routine activity for the leader of 28,500 American troops stationed in South Korea.

This time, however, he will be absent from the session "due to the security situation on the Korean Peninsula," the USFK said in a statement.

"All decisions regarding the schedules of USFK leadership are based on our alliance priority to maintain readiness at all times," it added.

The USFK said such a decision is not unprecedented. 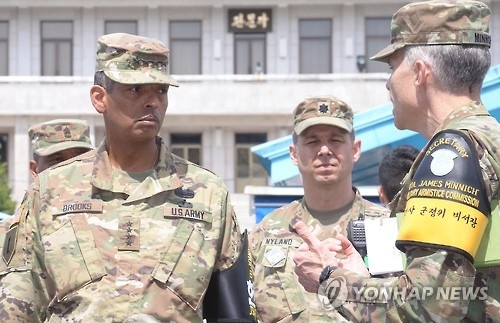 Gen. James D. Thurman did not attend hearings in 2013 because of his responsibility to maintain readiness on the peninsula.

The North is widely expected to take additional provocative acts in the near future, probably another nuclear test or more missile launches.

Especially, it marks a series of key political events this month including the 105th anniversary of the birth of the communist nation's late founder Kim Il-sung on April 15. He's the grandfather of the current leader Kim Jong-un.

The Donald Trump administration has stated it leaves "all options" on the table to deal with the North's nuclear ambitions.

USFK commander to skip hearings in DC amid tensions in Korea

USFK commander to skip hearings in DC amid tensions in Korea