SEOUL, April 11 (Yonhap) -- China's top nuclear envoy said Tuesday that he will work hard to bring the United States and North Korea to the negotiating table for direct talks aimed at resolving the North's nuclear stalemate.

Wu Dawei made the remarks in a meeting with Rep. Sim Sang-jung of the minor progressive Justice Party. During the 40-minute-long meeting, the two discussed North Korea's nuclear program and other issues of mutual concerns, according to Sim, who shared what was discussed in a press briefing.

"Since the U.S. is rejecting the idea of holding multilateral negotiations, (we) will actively work to arrange talks between the U.S. and North Korea," Sim quoted Wu as saying during the meeting.

This was in response to Sim's request that China get more involved in bringing the North to the multilateral negotiating table aimed at dissuading its pursuit of nuclear weapons. 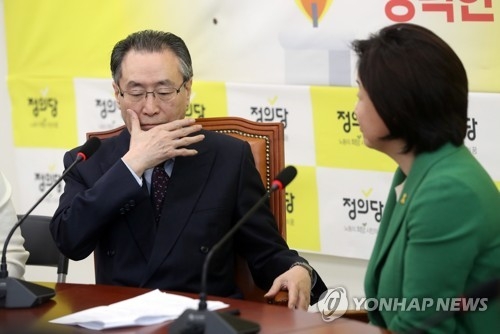 "(China) has always endeavored to resolve (the North's issue) through talks on the basis of the denuclearization principle. ... But there are states that have denied dialogue. One is North Korea, and the other is the United States," he added.

Wu expressed concerns that rising tensions and the possibility of a war on the Korean Peninsula is a "dangerous matter to everyone," comparing the situation with a torn fishing net that eventually kills the fish and leaves it to pollute the water.

Wu also voiced frustration with the recalcitrant North, saying that the Kim Jong-un regime does not listen to China trying to dissuade it from developing nuclear weapons, calling it an intervention in its domestic affairs.

"We are also making efforts, but Kim Jong-un will not listen to us," he was quoted as saying.

He still promised that China will continue to faithfully enforce relevant U.N. Security Council resolutions against the North to help its move toward denuclearization. 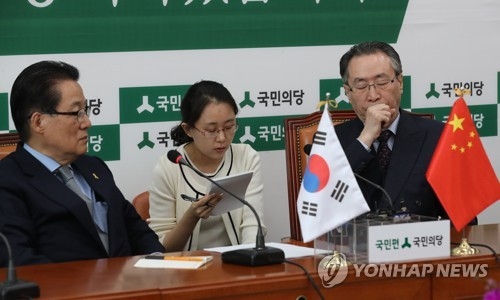 "The China-South Korea ties are facing challenges now, but the responsibility does not rest with China," he said. "The THAAD issue is having an impact on the relations."

Wu urged South Korea to recognize China's concerns and take necessary measures in a way that the friction caused by the THAAD deployment comes to be resolved.

Last year, South Korea decided to host THAAD on its soil despite China's fierce opposition for fear that its strong radar could hurt its strategic security interests.

Relations between the two have deteriorated ever since as China launched retaliatory measures targeting South Korean companies and goods, including Lotte Group, which provided the land necessary to house the THAAD battery.

Wu admitted that Chinese people are complaining a lot about Lotte Group providing the site, but he denied the Chinese government's involvement in any retaliatory steps, saying that it is purely people's voluntary actions.