SEOUL, April 11 (Yonhap) -- Idol group TWICE recently made its overseas concert debut in Bangkok, captivating a 4,000-large crowd at the Thai capital, according to its agency.

The group concert was held at the Thunder Dome in Bangkok on April 8, where the nine-member team churned out its hit songs including "Cheer Up," "TT," and its most recent "Knock Knock," JYP Entertainment said.

During the three-hour show, members thanked Thai fans for their support and were later met with a surprise thank-you video produced by Thai fans.

Member Jihyo was unable to join the rest of the team due to her knee injury, but was present at the venue to support her colleagues.

"Although Jihyo isn't in the condition to stand on stage as usual, she nonetheless joined the concert to return the favor to Thai fans who have waited," JYP Entertainment said. 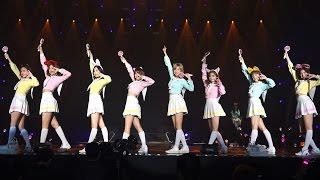