Cha holds the single season scoring record by a South Korean in Europe with 19 goals in all competitions during the 1985-86 season for the German side Bayer Leverkusen.

Son, 24, is currently just one shy of Cha's record, after scoring twice against Watford in the English Premier League (EPL) on Saturday.

"It feels nice that Son has brought this forgotten man to the surface," Cha said in a phone interview with Yonhap News Agency on Tuesday. "Judging from his form and the number of matches remaining, I think Son will break my record."

When Cha scored 19 goals, 17 of them were from the German Bundesliga. Son, meanwhile, has scored 11 goals in the EPL, six in the English Football Association Cup and one in the UEFA Europa League.

"I think it's not important how many goals you score in the league," he said. "Back then, the situation was a little different than today, but still, scoring that many goals shows how great a scorer he is." 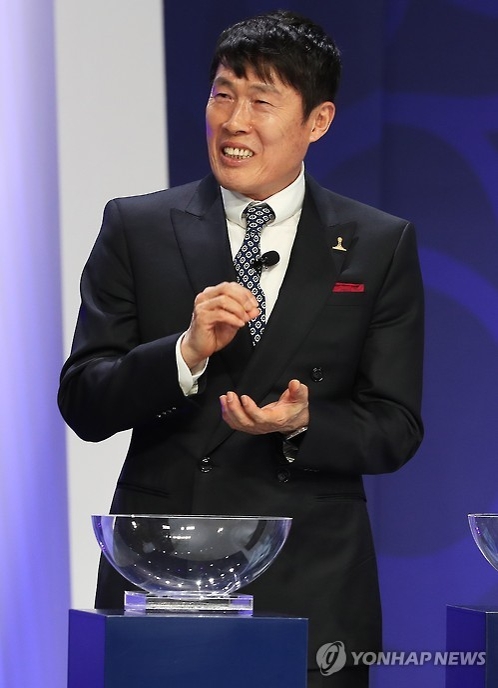 Son became the first Asian player to reach double figures in goals in a single EPL season after scoring two against Watford. He is also enjoying the highest goal tally of his professional career. Son's previous career high was 17 goals in the 2014-15 season with Bayer Leverkusen.

"It's not an easy thing to have double-digit goals in a season," said Cha, who scored 98 goals in 308 Bundesliga matches. "There is a reason why top clubs in Europe want to sign a player who can score an average of 10 goals a season."

Cha, who also played with SV Darmstadt 98 and Eintracht Frankfurt, said Son is starting to show off his skills to shake the opposing defense, although there are still things he needs to improve.

"If you are a forward, you need to penetrate the opponent's defense, make passes to set up others and score on your own ability, and Son is showing all of these things recently," he said. "However, I think he is still weak in the air. If he can improve that, he will able to score more goals from header."

Cha, who won two UEFA Cup titles with German clubs, said Son reminds him of old memories. The 63-year-old hung up his boots in 1989.

"It really brings me back old memories of playing football," he said. "I hope Son continues to entertain South Koreans and football fans with his good performance."

Cha is currently a vice president of the local organizing committee for the 2017 FIFA U-20 World Cup. South Korea will host the FIFA competition from May 20 to June 11 in six cities.

"The U-20 World Cup is a big FIFA competition, but it's sad that the tournament is not receiving a spotlight because of domestic issues," he said. "Since the presidential election will be completed before the tournament opens, I hope fans will give more support to our young players. They will have a good result if they can get support."