The former software mogul made the promise during a lecture before representatives of small and medium-sized enterprises, saying big businesses play a small role in creating jobs.

"Job creation is done by small and medium-sized firms or venture firms," Ahn said. "Quality jobs are created when people work hard at mid-sized firms and grow them into large businesses." 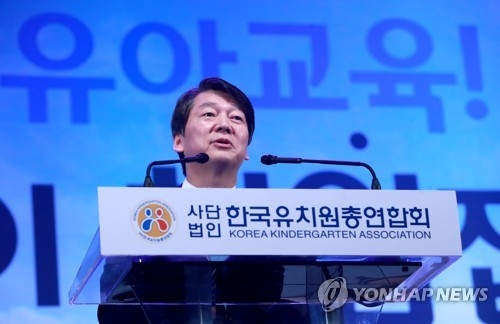 Ahn, who founded South Korea's best known anti-virus software firm AhnLab, added he would provide a temporary government subsidy to young people working at small and medium-sized firms to raise their average income from 60 percent to 80 percent of what their counterparts at conglomerates receive.

He laid out plans to reform the family-controlled conglomerates known as chaebol by giving more power to the state antitrust watchdog.

"The Fair Trade Commission must be given the authority to not only approve corporate mergers but also separate (control)," he said, citing the harmful consequences of monopolies and oligopolies.

He reiterated his signature pledge to lead the nation into the technology-driven fourth industrial revolution, saying the government should allow the private sector to take the initiative.

Later in the day the candidate met with kindergarten teachers and other educators to discuss his plans to support the childcare industry.

He promised to provide more government support to increase the salaries of kindergarten staffers and improve their working conditions and welfare.

The maverick politician has emerged as a formidable contender in the May 9 presidential poll with surveys indicating a neck-and-neck race with longtime frontrunner Moon Jae-in of the liberal Democratic Party.

Ahn pledges to create jobs through small or venture firms

Ahn pledges to create jobs through small or venture firms